For the title, see Prospector (title).

The Prospectors[1] are dwarves mostly found in the ranks of the Explorer's League from Ironforge. Muninn Magellas is said to have an army of prospectors.[2]

Prospector Ironboot was affiliated with Gadgetzan and Prospector Stonehewer with the Stormpike Guard. There are also earthen prospectors. 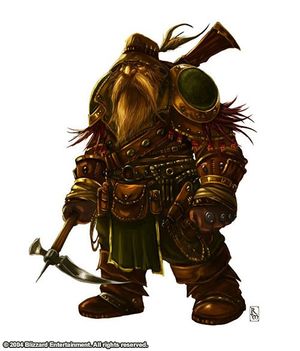 For untold centuries, prospectors wandered the mountains of Khaz Modan searching for untapped veins of ore and potential sites for new underground clan holds. However, with the discovery of their own titan origins and the founding of the Explorers' Guild, the ranks of the dwarven prospectors have swollen and their wanderings have spread until they now cover all of Azeroth. A dwarven prospector often ventures into the wild on his own, and few set out without a personal arsenal of weapons and the skills to use them. Dwarven prospectors are proficient with all simple and martial weapons, and light armor. Dwarven prospectors are often well versed in many languages, and learning new ones is extremely easy for them.

Prospectors can be a superstitious lot, and many have particular items they swear were vital to past successes and victories. Traditionally this item has been a rock taken from the prospector's birthplace, but some prospectors swear by their "special belt" or "lucky boots".

Prospectors are also known for their prodigious memories for places to visit. They are often compared to the memory of kodo beasts (which will remember the face of a hunter who wounded them more than a decade earlier).

Prospectors are also experts at library research as they study their past and future destinations in the halls of a library or archive.

Prospectors often make numerous friends and allies in their travels, until it seems as though they have acquaintances nearly everywhere they go.[5]

They are dungeoneers and can speak Dwarven and Common.[6]