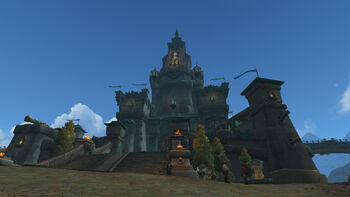 Proudmoore Keep is a large castle and palace in the city of Boralus that serves as the seat of power for House Proudmoore, the ruling faction of Kul Tiras. As a result, the keep is also a center of government for Kul Tiras as a whole, and is one of the most fortified locations on the island. Proudmoore Keep can be found in the far west of the city, bordering the areas of Upton Borough, Unity Square, and the Proudmoore Academy to the south and west. The two main entrances, as well as most of the grounds, are protected by the Admiral's Elite Guards.

When Jaina Proudmoore returned to Kul Tiras after the outbreak of the Fourth War, she would be taken before her mother Lord Admiral Katherine Proudmoore outside the main doors of Proudmoore Keep. There, at the urging of Lady Priscilla Ashvane, the Lord Admiral sentenced her daughter to death for treason and disowned her before retiring into the Keep.[1]

Later in the Kul Tiran civil war, when Boralus came under siege by forces of House Ashvane and their pirate allies, Proudmoore Keep became a major focus of the attackers' efforts. Dread Captain Lockwood in particular trained powerful cannons on the castle to pressure those sheltering within into surrender. Alliance and Proudmoore forces would eventually push through the city and relieve the assault on the Keep, before ending the siege.

Lorena, a member of the Kul Tiras City Guard, is said to have guarded a keep on the island.[2] The keep could have been Proudmoore Keep.