The Proudmoore flagship[1] is a Kul Tiran battleship that formerly served Daelin Proudmoore. At some point it was sunk and many years later, Jaina Proudmoore raised it from the bottom of the Great Sea from a location near Theramore Isle sometime after the Burning Legion's third invasion. 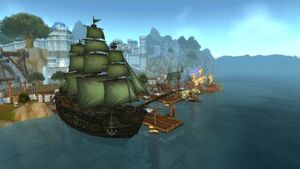 Jaina's ship in Stormwind Harbor prior to leaving for Boralus.

Originally built by Dorian Atwater, Daelin Proudmoore used it as his flagship when acting as Grand Admiral for the Alliance.[5] Although not stated, at some point it was sunk somewhere near Theramore Isle, probably during the Invasion of Durotar.

Jaina sought out this ship sometime prior to the Battle for Lordaeron, after retrieving her father's pendant from the Ruins of Theramore.[6] She would then used it at the battle in Lordaeron Keep, flying it through the air using arcane magic, and using its cannons to create a hole in the walls of Capital City to allow the Alliance forces through. Jaina teleported those who had gone into the throne room to the flying vessel when Sylvanas Windrunner unleashed the blight on the ruined city.[2]

It was later seen at Stormwind Harbor when the Horde extraction team were attempting to leave Stormwind City.[7] After the extraction, Jaina used the ship to take herself and the Alliance emissary to Boralus in order to convince Kul Tiras to rejoin the Alliance. While on the trip to her homeland, Jaina had a nightmare about her father, him saying her mother would never forgive her and calling her a murderer. After reaching the city, it was left in the main canal of Boralus for a short time but was later moved to an unknown location shortly prior to the events in Kul Tiras.[3]

After Jaina became Lord Admiral, she used the vessel as her flagship during the Battle of Dazar'alor, and fought Horde champions on its main deck.[4]

The ship has a unique model although it differs considerably from its in-game appearance compared to the Warbringers cinematic which has four masts instead of three.

The in-game model is unique compared to the other Kul Tiran vessels. Most noticeably having a different design for its prow, which lacks the metal protection on the front and is not as angular. This seems to be to represent it as an older type of ship to those found in Kul Tiras during Battle for Azeroth. It also has bits of algae or seaweed clinging to it in several places as part of its unique model and lacks the adornments on the sails that most Kul Tiran ships seem to have, being solid green instead. Despite its unique model, it lacks the siren figurehead present in the cinematic and the animated short.[8] The end of its bowsprit is adorned with a spear.

Its cinematic appearance is a modified version of the other Kul Tiran ships.[8]