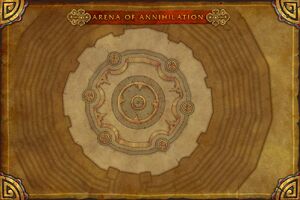 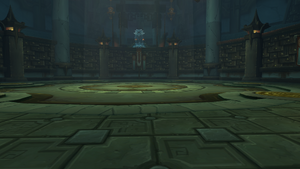 The Proving Grounds is a special type of single-player scenario that allows players to both learn and demonstrate the core skills associated with a given role or class. These might take the form of testing how long a tank can protect an NPC healer from a stream of oncoming enemies, or how much damage a rogue can deal to targets while avoiding awareness and movement checks of increasing difficulty. The system is intended to be a fun way for players to practice some of the skills that are essential for group gameplay, and for expert players to demonstrate mastery and compete for positions atop leaderboards, similar to the Challenge Mode feature.

There are three types of challenge, Damage, Tank, and Healer, with each providing appropriate challenges. Each challenge can be tackled in Bronze, Silver, Gold or Endless mode, with each difficulty unlocked by defeating the previous one. Higher difficulties provide a stiffer challenge not only in terms of numbers but also in complexity, with more complicated sequences and combinations of enemies. Endless mode provides the player with a literally endless challenge, testing players to see how long they can withstand the onslaught.

The Proving Grounds become available at level 15, but only players at level 100 or higher will be allowed to progress beyond Bronze difficulty.

Players may enter the proving grounds by speaking with either Trial Master Rotun inside the Temple of the White Tiger in Kun-Lai Summit, or with any class trainer.

Trial Master Rotun will start a trial, but before starting out, feel free to repair, change talents, and eat or drink using materials provided by Furnisher Echoroot, and loot a

At the February 2014 press event, it was revealed that getting silver in a specific role would be one of the requirements to queue for a random Heroic at max level. Players will still be able to queue for normal dungeons regardless of Proving Grounds progression. Ion Hazzikostas chimed in with more information:

To at least get everyone on the same page in terms of information, since a summary of a translated version of a translation of a few sentences in a single interview may not be the best foundation for a 24-page discussion, here's an overview of our current thinking:

In the past, challenging content and random matchmaking have often not gone so well together. Relying on item level does nothing to prevent a random group from getting, for example, a tank who may literally have never tanked before. Everyone has to learn somewhere, but we'd rather not have that learning come at other players' expense. One option would be to require a full premade group to do Heroic Dungeons, as we do with Heroic Scenarios, but that would present a very high barrier to entry (finding 4 other people with rigid role requirements is much harder than finding 2 other people with no role requirements). This solution represents a compromise in order to allow the content to see a broader reach via matchmaking while minimizing frustration.

And yes, we realize that by formally using Proving Grounds as a qualification, it will be incumbent upon us to further refine their balance and mechanics. We'll be updating them for Warlords, and we're confident that we can make them a fair test of baseline ability within a given role.

Expanding upon the above, it has been stated that in Warlords of Draenor the Proving Grounds will tell failing players what they did wrong, making it something of a teaching tool rather than simply a test.[1] These improvements will likely not be present at the start of the expansion, but will be added as the expansion progresses.[2]

Rotun offers a different family of trials for each role, one for damage-dealers, one for tanks, and one for healers. Each family has four ranks: bronze, silver, gold, and endless. To start higher-ranked trials, players must first beat lower-ranked trials of the same family.

No friendly NPCs are involved in the damage trials.

The bronze Basic damage trial consists of five waves, and each wave must be defeated before time expires. There are three types of enemies:

The endless Basic damage trial is putting your skills to the test. You have one minute to beat each wave and a fifteen-second break after the 10th wave marker and repeats.

Sikari the Mistweaver is present during this trial.

The bronze Basic tank trial consists of five waves, and each wave must be defeated before time expires. There are two types of enemies:

The endless Basic tank trial is putting your skills to the test. You have one minute to beat each wave and a fifteen-second break after the 10th wave marker and repeats.

Kavan the Arcanist, Ki the Assassin, Oto the Protector, Sooli the Survivalist and Speedy are present during this trial.

The bronze Basic healer trial consists of five waves, and each wave must be defeated before time expires. There are two types of enemies:

The endless Basic healer trial is putting your skills to the test. You have one minute to beat each wave and a fifteen-second break after the 10th wave marker and repeats.