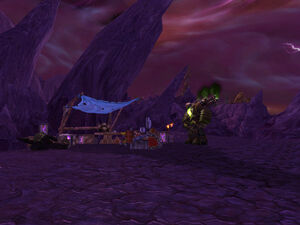 The Proving Grounds is an area of broken plains just east of Area 52. It is the site of a small goblin camp and little else, but the name is presumably given because it has in the past seen several battles between the goblins of Area 52 and outside dangers such as the nearby Burning Legion and roaming wild beasts.