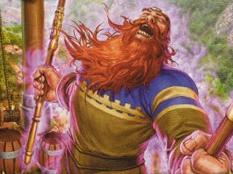 Psychic Scream is a level 18 priest ability that causes up to 5 nearby enemies to run away in fear. It is one of the priest's primary forms of crowd control.

The main drawback to the use of Psychic Scream in PvE is the potential for fleeing mobs to aggro other mobs, causing a number of additional enemies to attack the priest or their group. In many situations this can be disastrous, and situational awareness is required to use it successfully.

Shadow priests can use

[Mind Flay] to snare a feared enemy, reducing the potential distance they travel and therefore the likelihood that they will aggro other mobs. While damage may break the effect, Mind Flay counts as a DoT and so has a reduced chance of doing so.

While Psychic Scream has the potential to affect several targets, some enemies are immune to fear, notably dungeon and raid Bosses, and all Undead mobs.

Psychic Scream can be indispensable in PvP due to its ability to interrupt players and remove them from play for up to 8 seconds. However, many players have abilities that render them immune from fear effects, and others will make use of PvP trinkets or similar abilities to end their fear prematurely. Damage taken may also cancel the effect. Psychic Scream also shares a diminishing returns category with all other fear effects.

While Shadow priests have a number of other options for single-target crowd control, such as

[Psychic Horror], Psychic Scream offers a powerful instant escape option from up to 5 opponents. With the exception of

[Holy Word: Chastise]. To compensate, these two specs have the talent

[Psychic Voice], cutting the cooldown of Psychic Scream in half.

Psychic Scream can allow priests time to cast spells uninterrupted, whether to heal or to deal damage, although direct damage spells will usually cause the effect to break. It is particularly useful when attempting to use

[Mind Control] on the target, due to its lengthy cast time. When attempting to Mind Control the target off a cliff or edge, Psychic Scream can be doubly useful in propelling them most or all of the way toward it, although it will not in itself cause targets to walk off high edges.

While direct damage will almost always break the effect, by placing several DoTs upon a target before fearing them and using Mind Flay, Shadow priests can cause significant amounts of damage while the enemy is helpless to respond, or escape.

When survivability is not the priest's prime concern, Psychic Scream can also be used regularly as a form of damage mitigation. By placing himself within range of a number of enemy targets the priest can use the spell to prevent them from damaging his team mates, by causing them to flee or at the least interrupting casters. Damage caused to feared opponents will usually break the effect, so this is of greatest use when a group of players is focusing upon a single target - such as a flag carrier or healer - removing other enemies from the situation. The 8 yard range of Psychic Scream means that this use may require the priest to place himself in the midst of battle, and timing can be critical in affecting as many targets as possible. However, such direct intervention may draw an undesirable amount of attention to the priest.

Although use of Psychic Scream will ideally result in enemies being feared for 8 seconds, trinkets, counters and the possibility of damage breaking the effect means that in PvP this will often not be possible. However Psychic Scream is still extremely valuable as a multiple-target interrupt, even if the effect is immediately broken. As with any interrupt, players may wish to save this ability for interrupting healers and casters at critical moments. Even non-casters such as hunters using

[Aimed Shot] can be interrupted in this way to great effect. Psychic Scream can even be used while the target is shielded with certain spells (such as

[Power Word: Shield]) to interrupt them and prevent them from completing their cast. Damage taken (or absorbed) while under the protection of shield or damage reduction spells will still count toward Psychic Scream's damage threshold in full, and such spells will not reduce the likelihood of Psychic Scream breaking.

Finally, Psychic Scream is of particular use in battlegrounds when players are attempting to perform an action such as capturing a base or picking up a flag. In these situations the priest may wish to reserve Psychic Scream for use at these moments, potentially making the difference between a win and a loss. The spell can also be of critical use in slowing the progress of flag carriers, although the unpredictable path taken by feared opponents means that while the target may wander directly away from his goal (or toward your team mates) on occasion he will in fact continue to travel in the same direction.