Not to be confused with Skyscreamer.

Pterrordax (sometimes pluralized as pterrordaxes),[1][2][3] also known as pteradons,[4] skyscreamers,[5] or pterrorwings,[6][7] are carnivorous, flying dinosaurs found on the Lost Isles, in Nazmir, Un'Goro Crater, Vol'dun, and Zuldazar. An adult pterrordax's sonic screeches are capable of turning a humanoid's eardrums to bloody pulps.[8] Zandalari trolls are known to use pterrordaxes as flying mounts.

Pterrordax eggs are incubated underneath the fossils of their forebears, allowing the hatchlings to absorb their ancestors' ferocity and intelligence.[8] Pterrordaxes eat direhorns.[9]

An intact pteradon skeleton recovered from Un'Goro Crater is exhibited in the Ironforge museum. Based on the skeletal structure, it is clear that its specific genus has not yet been encountered. The skeleton could have been preserved for any number of centuries beneath the region's rich soil.[4]

Pterrordaxes have lungs capable of breathing air with a low saturation of oxygen, allowing them to live upon the highest peaks of Zuldazar where most species are unable to breathe.[10] Pterrordaxes' salivary glands have restorative properties.[11] 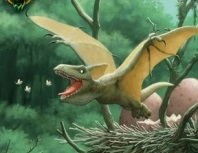 [Pterrordax Hatchling] in the TCG.

Please add any available information to this section.
Pterrordaxes are tamable by hunters as an exotic species, requiring Beast Mastery specialization.

Pterrordax soar through the air, using their keen predator's senses to satisfy their taste for fresh meat. These fierce creatures stand as tall as a horse and weigh up to 1,500 pounds. Their pigmentation ranges from moss green to deep emerald. Claw-tipped wings stretch out form the back of the reptilian creature. Green eyes shine above a long, beaklike snout lined with razor teeth. While weaker than other dinosaurs, pterrordax possess great agility. Pterrordax prefer to hunt alone; normally, adventurers encounter them in pairs only during mating season, a two-week period in the springtime. Pterrordax may form flights when their breeding grounds are threatened by a strong foe, but disband once they eliminate the threat. A hungry pterrordax attacks any creature smaller than itself, disdaining carrion. It batters enemies to death with its clawed wings and tears the flesh from bones with its fanged beak. A badly wounded pterrordax retreats and flies back to its lair to rest.[13]

Pterrordax are likely based on the various fictionalized and fancy representations of flying reptiles in fiction, due to their aggressiveness, teeth and apparently having large prey as a food source. This situation in similar to that of the raptors. Also notable is that while pterrordax are considered dinosaurs in the RPG, the real-world pterosaurs that they are based on were not actually dinosaurs (though they were closely related to them).

They are likely closely related to skyscreamers who also go by the similar name of "pterrorwing."