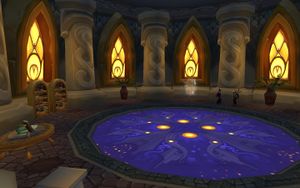 Inside the Purple Parlor. 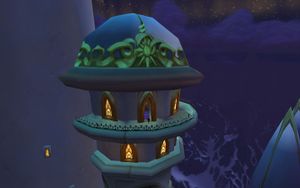 The Purple Parlor seen from outside.

The Purple Parlor is an area high in one of the spires of the Violet Citadel in Dalaran. It houses several mages as well as a butler that sells food, drink, and alcoholic beverages. It includes a balcony with a view of Dalaran.

After Dalaran moved to the Broken Isles, Revil Kost and Mardigan - the friend and son, respectively, of Karlain of the Council of Six - can be found here as well.

[110] Away From Prying Eyes, the normal residents of the Purple Parlor are replaced by the Council of Six, sans Vargoth.