From Wowpedia
(Redirected from PvP Talents)
Jump to: navigation, search 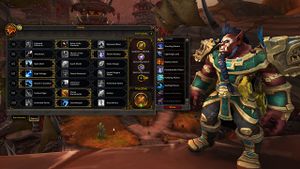 PvP Talents in Battle for Azeroth.

Full listings of the PvP talents available to each class can be found on that class's abilities page, e.g.: Priest abilities.

The level 20 slot offers a choice of three "trinket"-type talents:

[Relentless]. The other three slots allow the player to choose from a pool of class- and specialization-specific PvP talents. The talents in this pool may improve the player's abilities, give new abilities, or grant passive effects.

From the Battle for Azeroth PvP preview:

With Battle for Azeroth, we’re making changes to how we’re handling talents in PvP. In Legion’s current Honor Talent system, talents become available as you earn Honor levels through participating in PvP, which puts players looking to get into PvP for the first time at a disadvantage until they earn the tools everyone else already has. In Battle for Azeroth, we’re streamlining the system so that PvP talents will become available as you level, keeping players on more even footing.

In Legion, PvP talents were organized in rows of three, much like regular class talents; in Battle for Azeroth, players will be able to select any three PvP talents from a large pool of options, along with a special crowd-control-breaking talent (variations on the old “PvP trinket”).

You’ll earn this crowd-control breaker at level 20, choosing from one of three available options via a fly-out menu. By level 110, all PvP talent options will be available to choose within the Talent pane (N). This system offers more options for customizing your character to suit your play style or your environment, whether that’s world PvP, Battlegrounds, Arenas, or the new Dueler’s Guild (more on that below). As with your class talents, you’ll need to be in a rested area to switch between these.