From Wowpedia
(Redirected from PvP interface)
Jump to: navigation, search 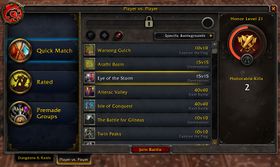 The Player vs. Player interface as of Battle for Azeroth

The Player vs. Player interface, accessed through the Group Finder, enables queueing for most forms of PvP, including battlegrounds, arena, rated battlegrounds, premade groups and War Games.

The Player vs. Player interface has four tabs, serving as a kind of menu from which to select the desired form of PvP: Casual, Rated, War Games and Premade Groups. Players can click on the desired option to access the corresponding pane. 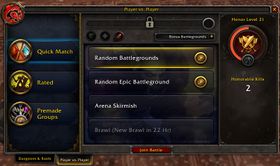 The Casual panel, as of Battle for Azeroth

At the top of the Casual pane is a role check pane. Players can select one or more of the main combat roles - tank, healer and DPS - indicating which role(s) they are willing to perform in a group. Only roles appropriate for a character's class are available for selection, but the character's specialization has no effect. Players must select at least one role before being allowed to queue, and players cannot change their chosen roles while already in a queue, meaning that players cannot queue for different roles for separate specific groups; they must make a single selection for all queues. Players are informed of the role they are expected to perform when their group is ready, and their character's role marker is set accordingly upon joining the group. However, players are free to change role and/or specialization once they have joined the battleground or arena.

Beneath the role check pane is a drop-down list from which players can select Bonus Battlegrounds or Specific Battlegrounds; the former offers access to Random Battlegrounds and arena skirmishes, while the latter allows the player to queue for a specific battleground. At the bottom left and right of the pane are the "Join Battle" and "Join as Group" buttons. Players can enter a queue for the corresponding battle type by selecting the desired option and clicking one of these buttons. Note that the "Join as Group" button will enter the player's entire party into the queue, and is only usable when in an eligible group.

Choosing Specific Battlegrounds transforms the Honor pane into a list of all battlegrounds available to your character. Each battleground's name is displayed followed by its size (eg. 10v10). Players can queue for specific battlegrounds by selecting the desired option and clicking the "Join Battle" or "Join as Group" buttons. 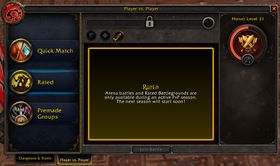 The Rated pane, as of Battle for Azeroth

At the bottom of the pane is the "Join Battle" button, which can be used to enter a queue for the selected type of PvP, provided you are in a valid group.

The main body of the Conquest pane is split into two windows: Arena Battles and Rated Battlegrounds.

The Arena Battles section features options for each type of arena match: 2v2, 3v3 and 5v5. Each option displays the player's number of wins, and their best and current personal rating, for that size. Mousing over an option will display weekly and season stats for that size, along with a projected conquest point cap. Players in a group of the appropriate size can queue for an arena match by simply clicking the "Join Battle" button. At the top right of the window are displayed the current rewards for winning an arena match. 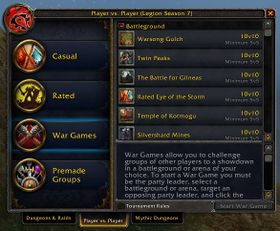 The War Games pane as of Legion

The War Games pane is split into two windows. The first is a list of all available venues, split into two drop-down lists: Battlegrounds and Arena. Each list can be opened or closed, and while open will display a list of venues very similar to that of the Specific Battlegrounds option. The Battlegrounds list shows each battleground's name followed by the normal/maximum size of the venue (eg. 40v40), beneath which is shown the minimum number of players required (eg. Minimum 10v10), and includes a Random Battleground option. The arena list is similar, showing all possible sizes (eg. 2v2, 3v3, 5v5) and the minimum number of players (eg. Minimum 2v2) for each arena, and includes an All Arenas option.

The lower window is a simple information display, featuring some basic information on using War Games.

At the bottom of the window, the "Start War Game" button can be used - only by a party leader, and only while targeting another party leader - to challenge the target to a War Game using the chosen map, as long as they part of a valid group.