Qiraji prophets are a type of qiraji who command powerful mental abilities, often able to take control of their enemies' minds and turn them against each other. 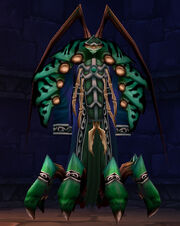 Veiled by a robe, qiraji prophets have eight visible legs and three elytra used as shoulder guards and a back-plate. They have long antennae and covered faces. Their robes feature sleeves, which is odd because they have no apparent arms in them. Their breastplate also seems to be the lower half of their head, or at least hangs from under it, and features what seems to be their arms and pincers.