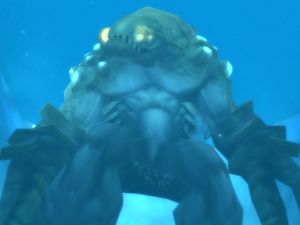 Third and final boss of The Slave Pens in Coilfang Reservoir, Quagmirran is a fungal giant; an ancient bog lord who has presumably resided for a great length of time within the natural cave systems that the Coilfang naga appropriated as their domain. He along with Rokmar the Crackler apparently resided in the caverns for many years until the arrival of the naga where they were enslaved.

Quagmirran along with Rokmar the Crackler were two very powerful beings that resided within the Serpentshrine, alongside their brethren, before the Naga arrived. The two giants were targeted by the Naga and enslaved, then later used to subjugate various other natural races under the Naga's control. Following their enslavement and usage their wills were broken and are both too far gone to save, Adventurers are sent to slay both Rokmar and Quagmirran by Watcher Jhang.[1]

Prior to his enslavement, He and Hungarfen, another fungal giant, ruled jointly and peacefully over their kin. With his enslavement and later his death, Hungarfen was left to rule alone, Which has thrown the Underbog into somewhat of a chaotic state. He is later put down by request of Naturalist Bite, so that the naga cannot enslave him to subjugate even more under their rule.

Quagmirran was once a ruler of Zangarmarsh's immense fungal giants. He was captured by the naga while wandering the region's serpentine caverns and subjected to excruciating torture. Now this broken being serves his overlords without question, silencing all who oppose the will of Lady Vashj.

Prior to engaging this boss remember to unlock and free Naturalist Bite in the cage in the room you are in. When you free him, 3 naga will spawn; make sure you are ready for them. After freeing him you can talk to him and he will buff you with a 30 minute "Mark of the Bite" which grants you 110 Nature Resistance and +5% on all stats. This will help with the Poison DoT and his AoE as they both are Nature based.

The fight is primarily a tank and spank fight, with healers concentrating on healing the tank and cleansing the dot from the poison bolt volley.

The strategy does not change between normal and heroic, though more care to survival should be taken due to the extra damage.