Queen Azshara is the second boss to appear in the Well of Eternity instance.

The songs of Queen Azshara's beauty, majesty, and power are too numerous to count, but it was her vanity that drove the Highborne to summon the Burning Legion. She now watches her most trusted magi empower the portal where Sargeras will be brought into Azeroth, content to let multitudes of her servants die in advance of the Dark Titan's arrival. 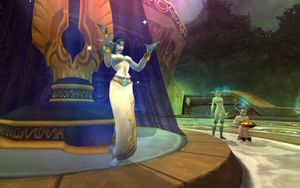 You are mine now! 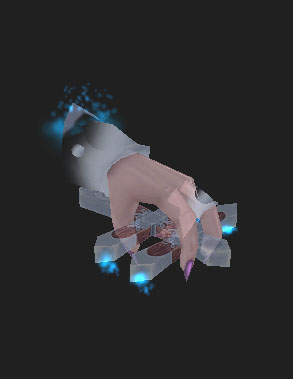 The hand of the Queen

Azshara herself is shielded from all damage, so DPS against her is pointless.

The absolute priority in this fight is to interrupt Dance, puppets! before Azshara finishes casting. If she completes the cast it wipes the party. Fortunately, she does not cast this often. The easiest thing to do is for a player with a ranged interrupt to /focus Azshara and watch for the casting bar. If no ranged interrupts are available, the tank should collect mobs near Azshara so a melee interrupter can quickly switch and interrupt the cast.

A less urgent (but still important) concern is You are mine now! which mind-controls a party member. All DPS should switch to the hand-shaped mob above the victim's head and kill it. This frees the victim.

The rest of the time the the party should be blasting the Enchanted Magi that activate throughout the fight. Two activate at the start, and as each one is killed, a new one activates and must be picked up by the tank. Some of the magi abilities are interruptible, but make sure you have a cooldown available to interrupt Dance puppets!

Once all Magi are dead, Azshara leaves and the players may collect loot from a chest.

Aggro
Ah, welcome. You are here to join us in the coming celebration? No? A pity.

First Magus
Queen Azshara yells: I have no time for such diversions. Keepers of Eternity, will you stand for your queen?
Enchanted Magus yells: I pray that the Light of a Thousand Moons will grant me this honor.

Second Magus
Queen Azshara yells: Still these strangers would oppose your queen's will. Who will stop them?
Enchanted Magus yells: Yes, Light of Lights! My life is yours!

Third Magus
Queen Azshara yells: I beseech of you, my beloved subjects: Put an end to these miscreants.
Enchanted Magus yells: The Flower of Life calls upon me. I WILL NOT fail you, my Queen.

Turning a player into a puppet

Wipe
To prepare for a world of perfection, the imperfect must be swept away.