Quel'thalas[sic] is a mostly empty contested closed zone in northern Lordaeron, between—and overlapping a part of—the "Northern Lordaeron" area, and the Eastern Plaguelands. It is probably a leftover from the original planned Quel'Thalas during the development of World of Warcraft, which was postponed, reworked, and later added in The Burning Crusade. 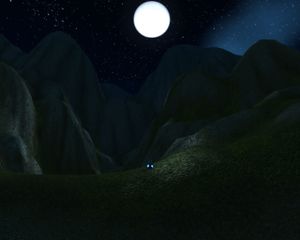 The moon rising over the mountains in Quel'thalas.

In an unmarked area of the map, a solitary white tower stands on the coast. This tower can be found by swimming around from northern Tirisfal Glades, staying close to the shoreline so as not to induce fatigue. Its purpose is unknown but it has been speculated that it represents an abandoned idea for allowing players to access Quel'Thalas. Another theory is that it is a leftover from before Quel'Thalas's current form was conceived.

If you continue past this tower, you can see that the blood elf starting area is not, in fact, part of the Eastern Kingdoms terrain, neither is located on the Eastern Kingdoms continent server. Instead, Quel'Thalas (like the Azuremyst Isles) is actually located northeast of Outland in its continent server. This can be seen if the character swims to where the Ghostlands are supposed to be, and then seeing that the map shows them in the middle of zone but they are instead on the sea. Players attempting the reverse of this trick (accessing Tirisfal Glades from the Ghostlands) will find invisible walls blocking their path, and if bypassed, Outland itself to the southwest.

With the Cataclysm world revamp and the availability of flying mounts, this zone was blocked off by an invisible wall, but following the Battle for Lordaeron in Battle for Azeroth, the invisible wall is removed, and it can once again be reached from northern Tirisfal or via flying mount. However, there is no reason to visit beyond curiosity as nothing new was added to the area.

Originally, Quel'Thalas was intended to be in the game at release and was even worked a little before being eventually postponed. There is a big empty green area and much of the surrounding terrain bears the hallmarks of a "cookie-cutter" terrain editor fill. Moreover, the name "Quel'thalas" will display when entering the zone. It also has its own chat channels, but there is no music in the area.

When the first expansion was made, they decided to cut the Quel'Thalas into two zones, and to place it on the Outland continent server, making it easier to restrict access to those who had not purchased the expansion. The same loading screen exists for both the blood elf and draenei zones, and Outland. This also causes the minimap arrow for party members in the blood elf or draenei zones to appear on your minimap when you are in Outland (or vice versa).