From Wowpedia
(Redirected from Quest:All In)
Jump to: navigation, search

Complete the "All In" scenario.

It is time to put our plan into action.

Oculeth will send you, Arluin and myself into the Arcway, where we shall trigger a manastorm in the Nightflow Conduit.

Valtrois will stay here and prepare Shal'Aran for a massive jolt of arcane power - hopefully enough to satisfy the arcan'dor.

<Name>... We have a saying... "To lead is to stand alone." It means only those who bear the weight of leadership can truly appreciate it.

Thank you for standing beside me. In truth, I do not feel alone.

Behold. The redemption of the Nightfallen. 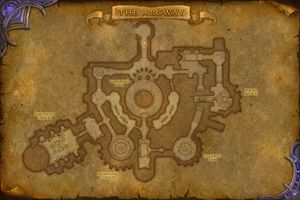 Upon returning to turn in the previous three quests:

Arluin is sitting in the smallest archway, with his back against the wall. He gets up and walks to the top part of the stairs, addressing the other Nightborne.
Arluin says: I heard about this crazy job you guys are planning. You weren't thinking of leaving me out, were you?
First Arcanist Thalyssra says: I thought you were only interested in lining your pockets.
Arluin walks down and onto the map of Suramar City as he speaks.
Arluin says: Look, I am not blind. I see what is happening in Suramar.
He turns and steps over to properly face the others.
Arluin says: I am not sitting this one out. The stakes are too high. So I am in, you got that?
Arluin says: Oh and don't worry about my usual fee - you can pay me when the job is done.

Oculeth teleports you, Thalyssra and Arluin into a phased version of the Arcway, beginning the scenario.

Slay the Duskwatch Archivists to escape the Forgotten Library.

Arluin says: This is not looking real conduit-y. You sure the old man knows his stuff?
First Arcanist Thalyssra says: Yes. We are close.

Reach the door to the Nightflow Conduit.

Follow Thalyssra and Arluin. Soon you will run into the bane of all adventurers: a locked door.

Defend Arluin while he opens the door to the Nightflow Conduit.

Arluin says: I never met a lock I could not open.
First Arcanist Thalyssra says: Look out!
Arluin says: Just give me one moment.

The enemies come in waves, filling the progress bar as they are defeated. Thalyssra will assist you in defending the door while Arluin is opening it.

Place the Ephemeral Manastorm Projector in the Nightflow Conduit.

Arluin says: Whatever you gotta do, do it quick! Lots of guards heading our way.
First Arcanist Thalyssra says: There! Place the manastorm generator near the conduit.

Again, defeat waves of enemies assaulting the barrier. Thankfully, they get damaged when trying to cross it.

You are teleported back to Meredil, ending the scenario.

Upon entering Shal'Aran, a short cutscene is played. The arcan'dor is now fully grown, its bough covering almost the entire ceiling, with vines hanging down from its branches.