From Wowpedia
(Redirected from Quest:Game of Thorns)
Jump to: navigation, search

<Jarrod is clearly injured. He winces in pain as he begins to talk.>

My lead forest operator, Shelly... she is being held not far from here... 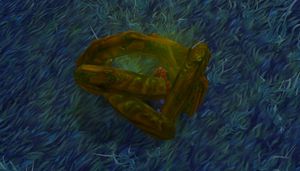 Shelly in the roots

<Something is moving under all of these roots.>

Shelly Hamby says: My... my husband... did you save my husband?

[91] Prune the Podlings before exiting the cave. All podlings are hostile now, so watch out! Also, keep an eye out for a Captured Critter, which starts the quest

[91] Captured Critters. Kill a path to the west-southwest, noting the rare Leaf-Reader Kurri on a northwestern island, which drops the

On the west end of the grove, up out of the marsh in the shadow of the garrison, find King Deathbloom. Kill him and turn in to Shelly Hamby just up the hill to the northwest.

This completes the "Gloomshade Grove" chapter of

[As I Walk Through the Valley of the Shadow of Moon], the last side chapter of the Shadowmoon Valley storyline. Shelly offers one last quest to pick her up as a follower, though.

The name of this quest is a reference to the television series Game of Thrones based on George R. R. Martin's A Song of Ice and Fire series of fantasy novels. The latter also has a reference in Draenor in the form of