From Wowpedia
(Redirected from Quest:Ghost-o-plasm Round Up)
Jump to: navigation, search

There's a valley to the southeast, the Valley of Bones, haunted by Magram ghosts. Sounds scary, doesn't it? Well think how scary it is to the Magram! If we captured ghost energy from that place, I bet it'd be worth plenty to those centaurs.

Here, take this crate of ghost magnets. If you place one between the two big skeletons in the valley, the Dead Goliaths, then ghosts will wander to it. Distance yourself, take out the ghosts and get their ghost-o-plasm—that's what we'll sell to the Magram.

You will also receive:45

There it is! Looks like you got some of it on you too. Kinda slimey, eh?

Well, thanks a lot for all the trouble, <name>. This stuff will be worth a fortune... if I can convince the centaurs what it is! 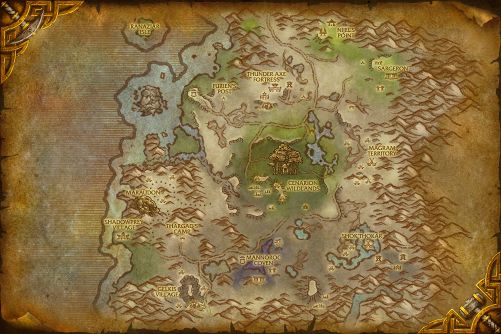 Horniz is just to the southwest of the Kodo Graveyard. Run east, then south to enter the Valley of Bones from the north (and not the west—Mannoroc Coven is a pain to get through). At the southern end of the valley are the two Dead Goliaths. Stand in between them and drop the

[Crate of Ghost Magnets]. Then get a few yards away from it.

Initially neutral Magrami Spectres will spawn and walk to the magnet. After a few seconds within 5 yards of the magnet, the spectres will turn hostile.

Kill them to loot their