From Wowpedia
(Redirected from Quest:Into the Oculus)
Jump to: navigation, search

Talk to Archmage Khadgar when you are ready to travel to the Oculus.

I fear Kathra'natir is behind the attack on Meryl. We have little time to act. I suspect Archmage Vargoth's involvement is no coincidence. While it greatly pains me to destroy an archmage of his caliber and worse, someone I once called friend, we cannot permit his betrayal to stand unpunished. It is time to follow him into the Oculus.

You shall be granted the title: Archmage

Have you gone to the Oculus yet?

You have done the unimaginable, <name>. We are all in your debt. I am proud to henceforth name you Archmage <name>!

Khadgar
Tell me when you are ready to go to the Oculus, <name>. I should be able to send you through its wards. 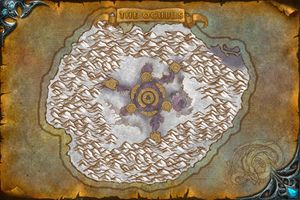 Archmage Vargoth says: It is sobering to think of how easily Kathra'natir subverted my will. Thanks to <name>'s hard work, I am free and he is not.
Meryl Felstorm says: <Name>! When you defeated Kathra'natir, I felt a great weight leave my mind!
Meryl Felstorm says: I have not been this well in an eternity. The Nightborne Soulstone has rendered Kathra'natir completely powerless. You have my utmost gratitude.
Archmage Khadgar says: I think our luck is changing for the better, old friend. With our newest Archmage and the might of the Tirisgarde, we will defeat the burning legion!
Esara Verrinde says: You are a shining example of the strength of the new Tirisgarde! To our newest Archmage, <name>!
Millhouse Manastorm says: Finally... the Nightborne Soulstone! All mine... I mean ours, of course!
Archmage Khadgar says: Unfortunately we will be unable to keep that promise, Millhouse. So long as the Soulstone serves as Kathra'natir's prison it is best left untouched. I'm sure there are plenty of other powerful artifacts out there for you to find!
Millhouse Manastorm says: Blast! I'm not your friend anymore.
Millhouse runs off.

You will start out at the top center area of the Oculus (where Ley-Guardian Eregos would be if you were in the WotLK version). Deal with the nearby demons and legion portals before taking the arcane portal to the Band of Transmutation.

Make your way through the demons to close the legion portal and then move on to the next ledge. Rinse and repeat. 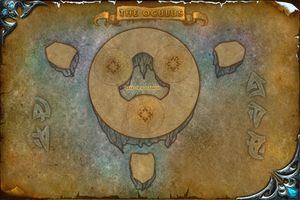 Stage 3: Twisting in the Wind

Mordriss is the highest in level out of the three (at 114), but his health is also significantly lower. The other two should prove to be no challenge.

Archmage Vargoth says: You have my thanks! I had been hanging out there for an eternity.

All you need to do here is chat with him.

I am forever indebted to you, <name>.

You have much to explain. Why have you betrayed us?

I would never betray our cause, <name>!

I was gathering notes on the Nightborne Soulstone when I was contacted by an emissary of the Empyrean Society. When I arrived at their enclave, our old nemesis Kathra'natir was waiting for me.

He has been in my head ever since, controlling my every word and action.

Is Kathra'natir behind the attack on Meryl?

Yes. It is Meryl he is after. He is using the Nightborne Soulstone and the power of the Nexus to drain Meryl of his power. Together you and I may be able to stop him.

He is still here, somewhere below. We must find him!

That is quite a story. Let's go. 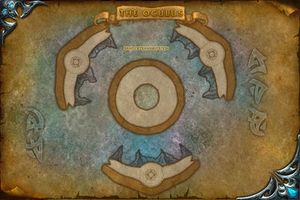 Archmage Vargoth says: We should head to ground level. Let me know when you are ready and I will teleport us there.

From this point on, he will follow and assist you.

Are you ready to teleport to the ground? 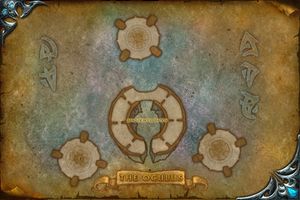 Archmage Vargoth says: Kathra'natir is in the Nexus building. It appears to be heavily guarded! Perhaps we should use an Invisibility spell and walk right in.

Make a dash towards the building entrance. Once inside, follow the path ahead to continue to the next stage.

Archmage Vargoth says: We made it! Kathra'natir is inside just ahead. 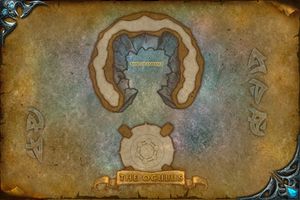 Archmage Vargoth says: There's the Nightborne Soulstone! He's using it against an image of Meryl...
Kathra'natir says: Did you really think you could defeat me, little mage? I am invincible!

The very first action to do here is

[Spellsteal] Kathra'natir's Vampiric Aura, which will greatly increase your damage, haste, and grant 100% leech. As a result, the demon should only last long enough to cast Carrion Swarm once (which you should

[Teleport: Hall of the Guardian] to leave the scenario.