The Delicate Sound of Thunder

From Wowpedia
(Redirected from Quest:The Delicate Sound of Thunder)
Jump to: navigation, search

The Delicate Sound of Thunder
Level: 71

Walt at the Explorers' League Outpost in the Howling Fjord wants you to use the Iron Rune Construct to explore the thundering cave at Baelgun's Excavation Site.

Dismiss your construct by dismissing it from the pet window once you have completed the quest.

The cavern that we opened at Baelgun's was the one place that most steered clear of... Can't say I blame 'em. The sound of thunder shot out of that cave, <name>! Loud, booming thunder!

I think near the end, it was abandoned by all. Bad, bad things happened to any that went in to explore - most never coming back.

I want you to check that cave out while you're at Baelgun's. Explore around the titan statue inside and report back with your findings.

Incredible! What could those iron menaces be up to? What are they doing in the Storm Peaks? And what is this Loken!? I'll forward this information to our central base of operations in the Dragonblight, <name>. I'll also let 'em know that you were invaluable in the acquisition of said info. 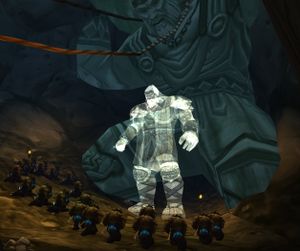 Loken appears to the iron dwarves.

Walk into the cave on the cliff.

The quest is named after the Pink Floyd live double album of the same name, which is further named after Ray Bradbury's work "A Sound of Thunder".