From Wowpedia
(Redirected from Quest:Webwood Venom)
Jump to: navigation, search

Webwood Venom was an Alliance only quest in Shadowglen, the night elf starting area. In this quest, players gathered venom from the spiders in the cave to the north for Gilshalan Windwalker

I came to Shadowglen to observe the webwood spiders that dwell in the Shadowthread Cave. They are cousin to a much smaller variety of spider; I believe the world tree has had a profound effect on them, and I would like specimens to study to confirm this.

First, I would like some of their venom. Gather Webwood venom sacs from the spiders in and around the Shadowthread Cave, to the north. I can then examine them for similarities with their smaller cousin's venom.

Did you gather the venom sacs, <name>?

Thank you, <name>. When I return to Darnassus I will compare the venom within these sacs with the venom of other spiders. It is my belief that it will have properties linked to the recent growth of our new world tree. 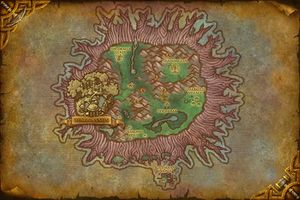 is in the northwestern corner of Shadowglen. Venom sacs can be looted from the Webwood Spiders found both outside and inside the cave. When you have collected 10, return to Gilshalan at the base of Aldrassil.