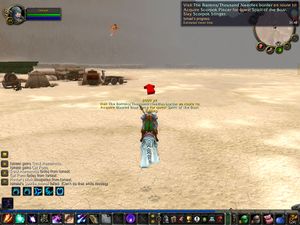 The QuestHelper in game and in the minimap 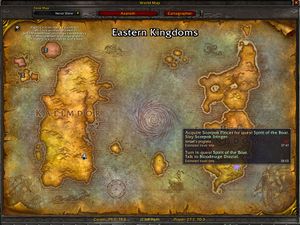 The QuestHelper in the map

QuestHelper is one of the most popular AddOns, available at http://www.questhelp.us. It shows you the shortest way to go to finish the quests you have. It considers how much time it takes to go from one place to another; and tells you if you should fly, take a ship, etc. Also, it will only tell you to go flying to some place if you already know the flight path.

All the tasks QuestHelper wants you to do are displayed on the World Map. There are 'marching ants' connecting the objectives, showing you the order QuestHelper thinks you should complete them in.

You can right-click on an objective to get a list of options for it.

Using the menus should, hopefully, be obvious. The only catch might be that they don't automatically disappear if you click on something else.

You can right-click anywhere on a menu to hide it.

There are 5 different priority levels an objective can have: Highest, High, Normal, Low, and Lowest.

You can use priorities as hints to get the objectives in an order you'd prefer, without the need to micro-manage the route list.

There are 3 filters you can use to automatically ignore quests, which you can turn on and off using the slash command /qh filter.

The first filter is level, which by default is on. It will cause QuestHelper to ignore any objectives that your current party probably isn't high enough to complete. You can adjust the level offset used by this filter with the command /qh level offset.

The next filter is zone, which by default is off. It will cause QuestHelper to ignore any objectives that aren't in your current zone. Note that this filter might not do the right thing for objectives that can be completed in multiple zones.

The last filter is done, which by default is off. It will hide objectives for any quests that aren't complete. You can use this if you don't want to quest and just want to turn your completed quests in.

You can force QuestHelper to show an objective that otherwise would have been filtered by typing /qh hidden and selecting Show from its entry in the menu.

Sharing allows you to share your objectives with other party members, allowing you to combine your routes and work together effectively.

Note that sharing only tells your peers what objectives you have, your completion progress for them, and the priorities you have assigned to them. Information such as item drops and monster locations are not shared.

Each peer will take this information and calculate their own route from it. Assuming you stay together and work cooperatively, which was the whole idea behind this feature, your routes should end up being almost completely identical, and you can follow it and rest assured that nobody is getting left behind. Objectives shared by multiple users won't be removed until everybody has completed it.

User objectives, by default, aren't shared. If there is somebody available to share with, an option will appear in the right-click menu for that objective to allow you to share it manually.

Objective priorities are shared globally. If one user changes the priority of an objective, that change will be reflected in all peers. This, again, was done to ensure that everybody's routes end up being roughly identical, and so that peers would have the correct priorities for timed quests.

Why aren't my quests showing up?
/qh hidden will list everything that isn't being shown, along with the reason for it being hidden.

How can I get rid of that arrow over my character's head?
/qh cartwp will hide the arrow. If you'd rather move it instead, you can drag it around by left-clicking; unless it's been locked, in which case right-click on it and unlock it first.

How do get that 3D arrow pointing where to go?
That arrow is part of Cartographer Waypoints. It should appear automatically as long as Cartographer is installed and running, and you haven't turned off that feature.

The Icons on my map are huge! How can anyone see anything?
If you find the icons are too big for you, you may enter /qh scale X%, replacing X with some reasonable scale. I'd start with 80%, depending on how that looks you can try bigger or smaller numbers.

This addon has been causing Assertion Failed! errors for many players. This will cause errors when exiting [World of Warcraft], including:

These have been confirmed by the [Blizzard Poster] Radoslawn, on the official WoW forums. [1]

This addon has also caused a lot of problems for players who log off in Dalaran and try to log in with QuestHelper on while being in Dalaran.

A common solution to this problem is to just turn QuestHelper off, go to another major city and log out and turn it back on if the addon is still needed.

To fix the Assertion Failed error follow these steps:

Note: Deleting your WTF and INTERFACE folders will cause you to lose most of your WoW and Addon settings. You can place these folders back into their proper spot in your WoW directory if the problem stops.

If this problem persists, your best bet is to make a post on the World of Warcraft Forums or just remove QuestHelper.