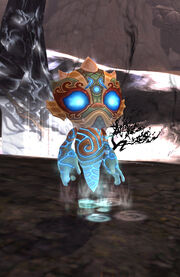 Defeat Quid, the Spirit of the Misty Falls.

Quid is a very powerful and very ancient water spirit, though you might not know it with his child-like ways.

This morning, Quid nearly killed several villagers in the bar when he jokingly caused several of the water kegs to explode.

As long as the water flows, Quid will remain. He cannot be slain. But he can be reminded that we do not take his dangerous antics in jest.

Would you be willing to carry this message to him on behalf of the village?

[Treasures of the Vale] and 24

The power of an ancient spirit in the mind of a child is a quite dangerous thing.

For the sake of the villagers, I hope he remains at bay for some time.

Thank you, my friend.

Adventurers are provided with and buffed by the

[Stone of the Water Strider], which provides waterwalking for 10 minutes. Head just southwest. Quid, a level 91 elemental water spirit with 1.6 million health, is at the base of the waterfall. It has the following abilities:

If interrupts are on a long cooldown, let the Water Bolts go through. Interrupt the Hydro Lance, though! The Water Blossom cast cannot be interrupted, so start running around while the channel happens. Otherwise, the fight is straightforward.