A quilbeast in Warcraft III. 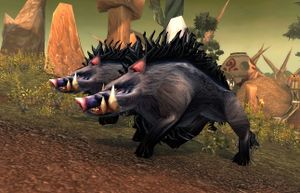 Quilbeasts in World of Warcraft.

Quilbeasts are a special breed of boars able to do ranged attacks by launching quills from their back. Beastmasters are known to be able to summon them.

The mok'nathal keep quilbeast pets at their village in the Blade's Edge Mountains.

Quilbeasts are strange boars found only in the Barrens of Kalimdor. The creatures seem to be a cross between a boar and a porcupine, and show the unique ability to launch their quills at both prey and predators. It may be that quilbeasts are related to quilboars, and the humanoids certainly breed the boars, keeping them as prickly pets and guards.[1]
The creature is an immense boar the size of a small pony, its tusks as big as swords. Literally hundreds of quills run along its shoulders and back, bristling with rabid fury.

Dire quilbeasts are rare and massive quilbeasts. They have more quills than normal and can launch these quills at their targets. They are even more savage than normal quilbeasts, known to become enraged at the slightest provocation.[1]