Highkeeper Ra was a titanic watcher who was originally charged to watch over the southern regions of Azeroth that would later be known as Pandaria, Uldum and Ahn'Qiraj. Ra bestowed life on the mogu,[2] who know him as Ra-den or Ra-Den,[3] which means "Master Ra" in their tongue.[4] The Highkeeper has also simply been referred to by the mogu as The Storm[5] and later "the sleeping keeper",[4] while Xuen has referred to him as "the storm lord"[6] or even "the storm god".[7]

Thousands of years ago, Ra was defeated by Lei Shen, who stole the keeper's power and used it to establish his empire. Ra was thereafter chained beneath the Throne of Thunder, the seat of Lei Shen's power.

War against the elementals

Much like the other titan-forged, Ra was created by the titans in order to wage war upon the Old Gods who had infested Azeroth. As the titans' colossal forms prevented them from taking direct action without harming or destroying Azeroth's world-soul, the titan Pantheon instead empowered titan-forged who'd then be known as keepers to do battle in their stead. Much like Odyn, Highkeeper Ra was empowered by Aman'Thul, the Highfather of the Pantheon.[8] Ra was also entrusted with

[The Fist of Ra-den] by Aman'Thul. The Highkeeper used it to bestow life on the titan-forged mogu race, and he wielded it in battle against the Black Empire of the Old Gods for years beyond counting.[2]

To reach the Old Gods, the titan-forged first needed to defeat their terrible servants, the Elemental Lords. The keepers resolved to divide and conquer their enemies, and so decided to split up and send each group of titan-forged to battle a specific lord. Keepers Ra, Thorim and Hodir were assigned to wage war on Al'Akir the Windlord. Using their mastery over skies and storms, the three keepers managed to defeat the Windlord atop his lofty domain.[8] However, even though the lords had been defeated, the keepers knew that they would return in time. Ra soon found a solution, and, together with the titan-forged sorceress Helya, he forged the Elemental Plane to imprison the chaotic elementals.[6][8] He then sealed its gates using

After the Old Gods were defeated and imprisoned beneath the surface of Azeroth, the titan-forged set out to install two powerful machines to help nurture the maturing world-soul of Azeroth: the Forge of Wills and the Forge of Origination. Ra set out to install the latter forge in the southern reaches of Azeroth, but on the way there he discovered the remnants of the slain Old God Y'Shaarj, including its monstrous heart. Ra resolved to seal these remnants in a subterranean vault that would become known as the Vault of Y'Shaarj, and assigned his mogu servants to watch over it and the surrounding lands.[10]

Eventually Ra and his followers reached their destination and, once they had installed the Forge of Origination, created the great fortress of Uldum to serve as the southernmost base of operations for the titan-forged. The Highkeeper assigned some of his tol'vir and anubisath servants to safeguard the area, while he himself continued further west to create the fortress of Ahn'Qiraj to serve as a prison for the Old God C'Thun. Once this task was done as well, Ra spent the following ages roaming and watching over the southern regions of Azeroth.[10]

The titans closely watched the actions of the titan-forged unfold and eventually departed the world, confident that Azeroth was safe in the hands of their servants. On a stormy day, Ra and his mogu followers ascended a colossal mountain to see the titans off. The legends say that the Highkeeper slammed his weapon against his shield, causing the rain to cease and the clouds to part while the mountain beneath their feet rose higher and lightning and fire illuminated the skies so that Ra and his followers could better glimpse the titans. Lastly, the winds howled a sorrowful farewell.[11]

Some time later, Ra was present during the empowering of the primitive proto-dragons and the creation of the five dragonflights. The Highkeeper channeled some of the powers of his creator, Aman'Thul, into the bronze dragon Nozdormu, granting him powers over time.[12]

One day, while the keepers were carrying out their work on Azeroth, they suddenly felt a great influx of power, and a surge of fragmented memories washed over them. Puzzled, the keepers sent a message to the Pantheon, asking what just happened and why, but never received a reply. After a very long time, Ra realized that this was no mere anomaly, but the very last remnant of the Pantheon's spirits after the traitor Sargeras had slain his brethren. The Highkeeper struggled to accept the death of the Pantheon, and carefully extracted the lingering power of Aman'Thul before storing it in a mountain vault near the Vale of Eternal Blossoms. He thereafter retreated into the catacombs beneath the land, depressed, to meditate on what he had learned, giving up his task of protecting the planet and leaving his titan-forged servants to continue their work alone.[13] 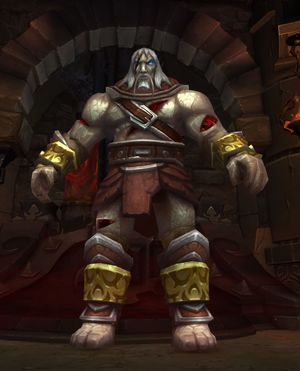 Ra-den as he appears below the Throne of Thunder.

The mogu continued to serve their master for many ages, even as Ra-den fell mysteriously silent. Some time thereafter, however, the mogu were struck by the Curse of Flesh, which turned them from stony beings into creatures of flesh and blood. Soon, the mogu fell to infighting, and still, their master said nothing.[14] Long thereafter, during the Age of a Hundred Kings when mogu warlords fought for dominion, Lei Shen rose to power. Lei Shen announced his intent to "awaken the gods", and only his most loyal of followers followed him into the heart of the Thundering Mountain, where Ra resided.[15] What the young warlord found was illuminating: the titanic watcher Ra-den, who stood guard over a powerful titan device, the Engine of Nalak'sha.[16]

The Highkeeper showed no reaction upon seeing Lei Shen, even as the mogu began asking him questions about the mogu's purpose. Weeks passed, and Lei Shen grew more and more frustrated, and still, Ra said nothing. When the mogu realized that Ra was not contemplating some grand plan, but had simply given up hope, Lei Shen unleashed his anger upon the keeper, accusing him of abandoning the work of the titans. The harsh words finally woke Ra fom his stupor, and the highkeeper brought the mogu to the place where he had stored the lingering soul of Aman'Thul. The revelation that the Pantheon were dead did not, however, cause Lei Shen to fall into despair like Ra had. Instead, the mogu decided that if the Pantheon were dead and their servant refused to continue their work, he would do so himself. Without warning, Lei Shen incapacitated Ra, bound the keeper in great chains, and stole not only the keeper's power, but also the power of Aman'Thul[17] (though he never succeeded in harnessing Ra's two artifacts).[11] Then, with his newly acquired powers, Lei Shen dubbed himself the Thunder King and established tyrannical rule over Pandaria until the time of his death. Ra-den himself was confined to a Hidden Cell beneath the Thunder King's capital, the Throne of Thunder.

Thousands of years later, Ra-den was found chained beneath the Throne of Thunder by adventurers. Broken by millenia of imprisonment and torture, Ra came to the conclusion that Azeroth was twisted, beyond redemption, and that the only answer to corruption was destruction. He was however stopped by the adventurers, who managed to give him a small amount of hope for the world. While he did not believe that the mortals could stop the approaching, all-consuming darkness, he believed they had earned the right to try. Ra vanished in a flash of lightning, and would not be heard from again until years later.

A vision of Ra wielding 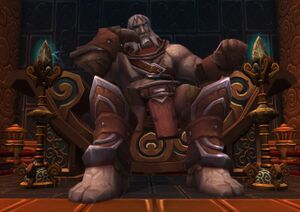 Ra in the Silent Sanctuary.

Ever since he was freed from the Throne of Thunder, Ra-den has been staying in the Silent Sanctuary within the Vale of Eternal Blossoms, accompanied by a force of mogu named the Rajani.

As he bravely fought to save the Chamber of Heart, Ra-den was pulled into Ny'alotha where he fell victim to N'Zoth's whispers. The despair he harbored for so long overwhelmed the last of his hope, rendering his corruption complete. He was eventually defeated by the champions of Azeroth during the Ny'alotha, the Waking City raid.

Gossip
Ah, the champion of Azeroth. I should've expected that you'd show up in the vale soon enough.
Why have you disturbed my peaceful exile?

Ra appears in the Saviors of Uldum expansion for Hearthstone as an extremely powerful uncollectible minion that can only be summoned by completing the difficult task of having seven Mogu Cultist minions on the board at the same time. Once summoned, he is fully capable of ending the game all by himself. 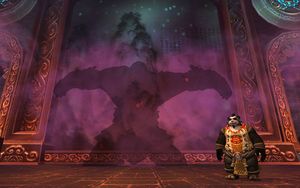 The shadow of Ra, as seen in

[Divine Bell] being "cast from the maker's flesh",[19] as well as the large wounds on Ra's body, together imply that it was literally made from Ra's flesh.