Race ideas represents the best efforts of the Wowpedia community to create a fact-based analysis regarding why a race may or may not be included as a playable race as World of Warcraft expands.

+ Lime green — Strongly for
+ Dark green — For
? White — Neutral, could influence either way
Also used for speculation and comparisons that may have some support in lore or World of Warcraft game mechanics. Must be cited (must be proven to be relevant to the topic).
- Orange — Against
- Red — Strongly against
Gray — Additional info
Used for observation or speculation related to the main point.

Arguments that aren't neutral are preferred to be cited.

It is mandatory that new race sections are not added unless they have been agreed upon by majority consensus in the talk page.

When proposing new race ideas please use your common sense and try to stick to Humanoid-type races rather than monster types — the Scourge, for example.

This page includes races directly connected to current playable races as protospecies/protoraces or subraces/subspecies (as this concept has officially entered into the game with the introduction of allied races in Battle for Azeroth). Note that Blizzard in the past appeared to have had a policy of choosing original and unique races.

Race ideas that don't have enough reason to have a separate section, but are comparable to current playable races are listed in the Other sections at the bottom.

Most races with physical attributes that are not comparable to current playable races are most likely impossible as a playable race such as nonbipedal races, winged races and giant-sized races. However a few of those races have been established as ideas for playable races, naga, vrykul and a few four-legged humanoid races.

Also note that race ideas for draconic humanoid races, primate races, pig humanoids and feline/cat humanoids are listed together in sections as general ideas as they represent similar looking groups.

It is also a good idea to consider Wowpedia:Race speculation methods and the Wowpedia:Rumored races test.

If you think something on this page is inaccurate, please check the discussion tab before you change it yourself. Let people know you think it is incorrect, and leave your ideas and sources for your information. Together, we can agree on how feasible it is. Only add verifiable and cited information. If something is added that lacks a source and proper citation, it will probably be viewed as speculation and will be removed or demoted to the neutral "?".

It is mandatory that anything other than minor edits are discussed through peer review here and agreed upon by group consensus. Please discuss ideas on the talk page if you feel there should be changes to the main article, so the page does not become a battle field for clashing ideas. If you do not follow the above, you may be prevented from editing. 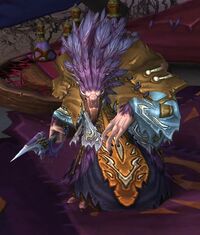 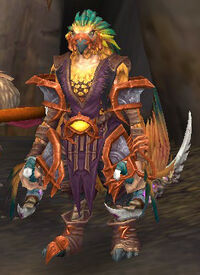 Keeper of the grove

Cenarius's favored children are: keeper of the grove (male) and dryad (female).

The playable Draenei race are the eredar that fled Argus and later inhabited Draenor, additionally a variant of draenei is already a playable allied race, Lightforged draenei.

Drakonid (and/or idea for a draconic humanoid in general)

Drakonid located at the Wyrmrest Temple.

The playable Dwarf race is the one that is part of the Kingdom of Ironforge prior to World of Warcraft: Shadowlands which add Wildhammer dwarf to the regular dwarf playable race, additionally a variant of dwarves is already an allied race in the Battle for Azeroth expansion the Dark Iron dwarf.

First seen in The Burning Crusade 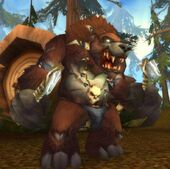 Furbolg in the Grizzly Hills.

The playable Gnome race characters are from the faction that escaped the irradiation of Gnomeregan, additionally a variant of gnomes is a allied race the playable Mechagnome allied race from Mechagon.

Hobgoblin in the Gallywix Pleasure Palace.

First seen in The Burning Crusade

Rexxar one of the Mok'nathal.

Hozen (and/or idea for a primate race in general)

Hozen a monkey-like race from Pandaria.

The playable Human race are specifically part of the Kingdom of Stormwind, additionally a variant of humans is an allied race, the Kul Tiran.

Vrykul (and/or their related variants)

Kobold: "You no take candle!"

Murloc (and/or their related variants)

The playable Orc race is the one who's skin turned green from the taint of the drinking of the blood of Mannoroth, additionally a variant of orcs is already an allied race in the Battle for Azeroth expansion the Mag'har orc.

Quilboar (and/or idea for a pig humanoid in general)

Saberon (and/or idea for a cat humanoid in general)

A female feline form of a troll priestess.

First seen in Battle for Azertoh

The playable Tauren race are native to modern Kalimdor, additionally a tauren offshoot is already a playable allied race, Highmountain tauren from the Broken Isles.

First seen in the Journey to Un'Goro expansion for Hearthstone.
Introduced in World of Warcraft in game with Battle for Azeroth

The playable Troll race is the Jungle troll race specifically the player characters are part of the Darkspear tribe prior to World of Warcraft: Shadowlands which add sand troll and what seems to be dark troll customization options for the regular troll playable race, additionally a variant of trolls is an allied race, the Zandalari troll.

First seen in Battle for Azeroth

Other variants of current playable races

Other unique variants of current playable races not separately listed above that are shown in-game are listed below:

Variants of a current playable race that is currently only seen as a single NPC in-game:

Night of the Dragon also established Skardyn cursed descendants of dwarves of the Dark Iron clan beneath Grim Batol.

Additionally there are factions of races who aren't established as physically distinct but can potentially be established as separate playable races in the future such as the Grimtotem tribe of tauren (they have unique tattoos) or the secretive Shen'dralar Highborne night elves.

Unique humanoids with physical attributes comparable to current playable races not separately listed above that are shown in-game are listed below:

Notes and other idea pages