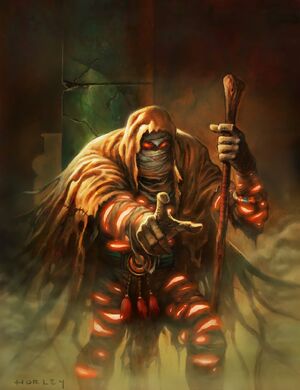 “He's very good at retrieving artifacts. From other people's museums.”

Rafaam is the main antagonist of the League of Explorers adventure in Hearthstone, serving as the third and fourth boss encounters in the Hall of Explorers, the fourth and final wing of the adventure. He is an ethereal thief who travels to different worlds to retrieve powerful artifacts,[1] and claims to have collected artifacts from hundreds of worlds.[2]

After the player completes the first three wings of the adventure and retrieves all three pieces of the Staff of Origination, a powerful Titan artifact, Rafaam appears and steals the Staff, using it to wreak havoc in the Hall of Explorers by animating the exhibits and stealing as many artifacts as possible. He animates Skelesaurus Hex, the Steel Sentinel, several swords, library books and Lordaeronian hammers,[3] and steals Arthas' signet ring.[4] After the player confronts Rafaam, he uses the Staff to flee the museum, using it to summon various bosses the player has previously fought throughout the adventure. Eventually, Rafaam is defeated, and the Staff is returned to its exhibit in the Hall of Explorers.

Rafaam would later make a brief appearance when he gives a crown to King Togwaggle.[5]

Rafaam returns in the Rise of Shadows expansion as the leader of the League of E.V.I.L.. In The Dalaran Heist, he serves as the main protagonist, the adventure being from the E.V.I.L.'s point of view. He successfully conquers Dalaran, and continues to use it as his mobile base of operations for the rest of the Year of the Dragon story arch.

He makes no physical appearance in Saviors of Uldum, but does factor into the plot. In Tombs of Terror, he serves the role of overarching antagonist against the League of Explorers again, though the player doesn't fight him. The main antagonist of the set is instead his most powerful minion, Dark Pharaoh Tekahn.

In Galakrond's Awakening, he is the final boss of the Explorers story, who need to stop him as he invokes Galakrond. In the E.V.I.L. story, he's instead the final playable hero.

Summon
I am Rafaam, the supreme archaeologist. 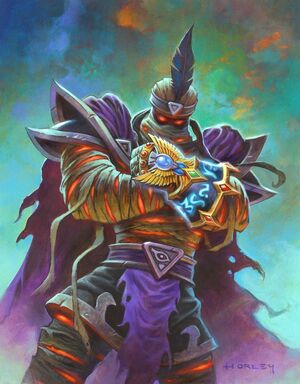 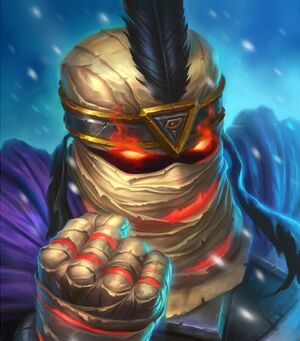 Thanks
Ah, thank you.

Sorry
I pity you.

Is that the deck you're going to use? Heh heh heh...

I like your deck. I think I will TAKE IT. 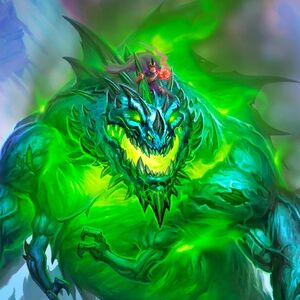 Oh yes. This hand of cards is INCREDIBLE.

Is this deck ALL GOLDEN? Your collection rivals my own!

Magma Rager?! Why would you play this card?

Your deck is garbage. Time to use my own.

Your deck is AMAZING. Hahahahaha!

Enough! You are nothing before the Staff of Origination!

Behold the FULL POWER of the Staff!

I am invincible! I wield the power of the Titans!

Playing Lantern of Power / Mirror of Doom / Timepiece of Horror

I have collected artifacts from HUNDREDS of worlds!

NO! I can not be defeated!

Together, we shall rule Dalaran!

My work is almost complete - what? Who is at the door? GO AWAY!

You! You are just in time to witness the culmination of my genius.

More power!
Yes... for Galakrond!
Glorious!
He grows even stronger!...
Now we are getting somewher!
Yes... YES!

5th Invoke (in response to Galakrond)

I don't knox what that means, but I don't like it.

He will destroy you! He will smack you around with his teeny-tiny arms! (first time)
Oh Galakrond! What a joy to watch you work!
Galakrond… save some for me!
Good boy! Heh heh - that is my dragon.
Galakrond, look how much you've grown!
Hah-HAH! I have the most epic mount!

I am Rafaam. I TAKE EVERYTHING!

Laugh with me Galakrond! It is no fun to evil laugh alone.
Ahhh, your laughter is mirthless. You should live in the moment more.

This victory leaves me feeling empty inside.

Which is ironic, given that I am a hollow shell of bandages.

Easy, Galakrond! If you destroy Azeroth, none will be left to FEAR me.
Have I gone too far? Quiet, Galakrond! I am thinking.
Perhaps my mother was right. Maybe I AM terrible and unworthy of love.