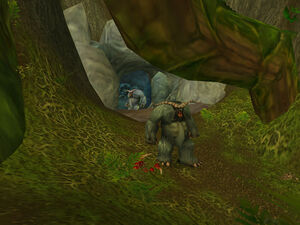 Rage Scar Hold is a dug in cave in northwestern Feralas. It contains the most vicious yetis in the area.

Books and symbols within the cave seem to indicate the Yetis are studying this kind of magic unless it was owned by some unfortunate magi in the past.

The contents of the cave and night elven architecture deeper within it possibly indicate it as a former night elf barrow den. Being as there are no night elves within the cave and no one seems to mention it as being so, the fate of the inhabitants after the yetis moved in seems to be bleak.