For the pre-Mists of Pandaria instance and associated lore, see Ragefire Chasm (Classic).

Ragefire Chasm is an instance dungeon located in Orgrimmar. The entry portal is in the Cleft of Shadow, next to Neeru Fireblade's tent. The volcanic caverns[1] are home to many hostile troggs, and once was one of the Burning Blade clan's bases of operations. Recently, suspicious activity has started showing up in the Chasm in the form of Dark Shaman, obedient to an unknown force.

Ashra Valandril was present to take care of the bosses of this dungeon before the Dark Shaman took over.[2]

Beneath the city of Orgrimmar lies this fiery chasm. A clan of troggs known as Ragefire Troggs had begun to appear in the chasm, from deep below the lava-filled tunnels. Magatha the Seer, of the tauren people, attempted to make peace with these creatures, but was met only with hostility. It was clear that these troggs were not interested in diplomacy, and could potentially overwhelm the entire Horde if left unchecked.[3]

A sect of the mysterious Shadow Council had also taken refuge in this chasm. This sect is known as the Searing Blade, and was led by Taragaman the Hungerer, a felguard; Jergosh the Invoker, a powerful warlock; and Bazzalan, a satyr. From their dark hiding place, they plotted to overthrow and destroy all that the Horde has built for themselves in these lands.

After the Shattering, the Dark Shaman were formed and overtook Ragefire Chasm. They cleared the presence of Searing Blade cultists and troggs and used the latter to feed the enslaved beasts they brought from the Firelands. Although Warchief Garrosh Hellscream recently called on a number of shaman to use the elements as weapons against the Alliance, the chasm's current inhabitants appear to be renegades. Reports have surfaced that these shadowy figures are amassing a blistering army that could wreak havoc if unleashed upon Orgrimmar.[4]

Alliance players also receive quests, given by SI:7 agents, who arrived via portal thinking that the horde is amassing an army down there which must be destroyed.[5]

Later, the Gob Squad, investigating several abductions in Durotar, enters an abandoned section of Ragefire, called Ragefire Caverns, where they find the Dark Shaman. The Kor'kron are using the Chasm as their secret headquarter, which is stormed during the Siege of Orgrimmar.

Ragefire Chasm in Siege of Orgrimmar

The Ragefire Chasm has been modified since the Dark Shaman had to be cleared from the area (who've been revealed to have been working for Garrosh from the beginning). A passage has been dugout leading into the newly constructed Underhold. The entrance is guarded by General Nazgrim and several Hellscream's loyalists. 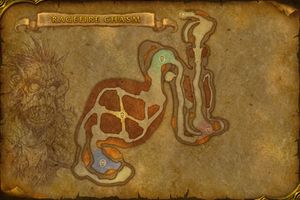 The presence of the Ragefire group of troggs in Ragefire Chasm beneath Orgrimmar may indicate that there might be the remains of a titan vault similar to Uldaman underneath the city.