For the lore of the zone and its status after Mists of Pandaria, see Ragefire Chasm.

Ragefire Chasm is an instance dungeon located in Orgrimmar. The entry portal is in the Cleft of Shadow, next to Neeru Fireblade's tent. The lava-filled chasm is home to many hostile troggs, and followers of the Burning Blade have also recently begun poking around the area.

This is one of the shortest instances in the game, and of the easiest difficulty. For many players, this will be their first instance. See the Instance Grouping Guide for some helpful hints.

Beneath the city of Orgrimmar lies this fiery chasm. Recently, a clan of troggs known as Ragefire Troggs have begun to appear in the chasm, from deep below the lava-filled tunnels. Magatha Grimtotem, of the tauren people, attempted to make peace with these creatures, but was met only with hostility. It was clear that these troggs were not interested in diplomacy, and could potentially overwhelm the entire Horde if left unchecked.

A sect of the mysterious Shadow Council has also taken refuge in this chasm. This sect is known as the Searing Blade, and is led by Taragaman the Hungerer, a felguard; Jergosh the Invoker, a powerful warlock; and Bazzalan, a satyr. From their dark hiding place, they plot to overthrow and destroy all that the Horde has built for themselves in these lands.

Ragefire Chasm consists of a network of volcanic caverns that lie below the orcs' new capital city of Orgrimmar. Recently, rumors have spread that a cult loyal to the demonic Shadow Council has taken up residence within the Chasm's fiery depths. This cult, known as the Burning Blade, threatens the very sovereignty of Durotar. Many believe that the orc Warchief, Thrall, is aware of the Blade's existence and has chosen not to destroy it in the hopes that its members might lead him straight to the Shadow Council. Either way, the dark powers emanating from Ragefire Chasm could undo all that the orcs have fought to attain.

The Warchief of the Horde, Garrosh Hellscream, believes that a swift and brutal strike at the cult's lieutenants might serve as Orgrimmar's best defense. If they're not silenced, the dark powers emanating from Ragefire Chasm could undo all that the orcs have fought to attain.[1] 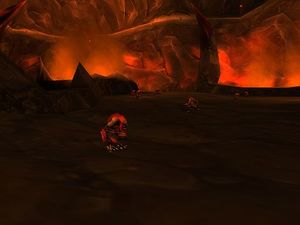 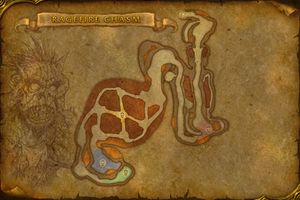 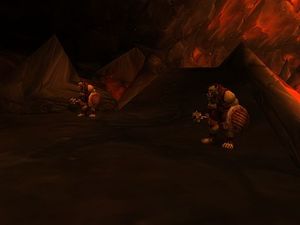 Grunts of the Searing Blade Clan

Along with The Deadmines, Ragefire Chasm is the lowest level instance in the game (recommended for players no higher than level 21). This instance is pretty much an easy experience and a good introduction to the instance system for those who are unfamiliar with it.

The group that you bring with you into the Chasm shouldn't affect your ability to complete the instance. As long as you have a good leveled batch of players, there is little to stop you in this instance. Definitely bring a healer along though, as you will need to make sure characters don't die. It's a long walk from the graveyard outside Orgrimmar back to the Cleft of Shadow. Keep in mind that all the mobs in the Ragefire Chasm are elite and much more powerful than your average mob. It will take teamwork to defeat these enemies, which is key to any instance.

After some initial elemental mobs, you will be forced to fight the troggs of the instance. These mobs should give you little difficulty. Just be sure not to pull too many at the same time, or things could get hairy. Upon dealing with the troggs you can continue through the instance to another batch of elemental mobs. These enemies are fairly easy if pulled in small groups of 1 to 2. These mobs will drop the Searing Bindings required for

[15D] Elemental Tampering. Once dealt with you can begin work on fighting the Searing Blade Cultists. These groups of mobs usually come in pulls of 2 to 3 mobs and will require coordination to effectively deal with.

Once you’ve cleared your way to the massive demon standing in the middle of the lake of lava, you can engage one of the powerful bosses of this instance; Taragaman the Hungerer. This Boss is fairly easy to deal with, and once you have effectively engaged with a melee tank, DPS will bring him down quickly. He hits harder than anything else in the instance, though, and has an uppercut that can hit you into other mobs or the lava, as well as a Blast Wave attack that has an annoying tendency of killing Imp pets that get too close. Once killed, be sure to loot his heart to complete the quest.

Once you are finished battling against the demon, the next two targets will be the leaders of the Searing Blade: Bazzalan and Jergosh the Invoker. Jergosh is located just ahead of where Taragaman was, while Bazzalan is located up the adjacent walkway, right above Jergosh.

Both of these mobs are straightforward fights as long as you do not drag any additional enemies into the fray. Once they are slain, the instance is effectively over and you can return to the entrance. As long as you didn't run the instance in a marginal group it shouldn't have taken you more than an hour. Not bad for an instance with five quests and a large number of blue drops. 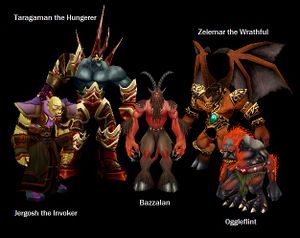