Ragnaros has several abilities that he uses in the fight, sometimes accompanied by yelling. They are as follows:

Ragnaros is summoned by Majordomo Executus who will perform the summoning upon a player's request through a dialogue. Executus must be defeated as an boss before he agrees to do so. Moreover, Executus will only be summoned when the runes of warding has been deactivated. They are deactivated by killing the bosses that guard them, which means every initial boss (except for Lucifron) in the Molten Core has to die before Ragnaros can be summoned.

This means that melee should be around Ragnaros generally on the south, west and north parts of the inner ring, and the ranged is on the south and west portions of the outer ring. There are small patches of wall on the outer rings that, when stood directly against will usually prevent Ragnaros' random fireballs from knocking you back.

This fight alternates between two stages - in the first, Ragnaros is up and everybody concentrates on DPSing him, in the second Ragnaros is immune to DPS, and the raid has to deal with his sons instead. Ragnaros is always up for 3 minutes (stage 1), then submerges for 90 seconds. This alternates until either the raid is wiped or Ragnaros is dead. 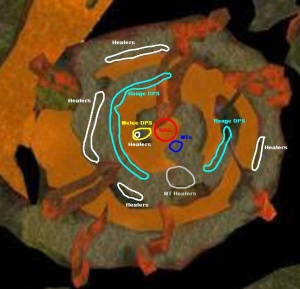 Zeph's Setup for Phase One

20 seconds before Ragnaros submerges and spawns Sons of Flame, the whole raid (exc. the MT who keeps tanking until the submerge) should collapse to the southern lip of the outer ring, as to be ready to handle the sons when they spawn. Mages should already be positioned at the collapse point. Mana users should be at the very edge of the ring, as to avoid the Son's massive mana burn aura. Tanks and Rogues should form a wall in front of the casters. 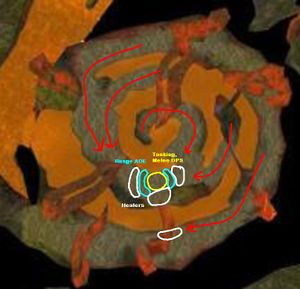 You receive 200 Reputation with the Hydraxian Waterlords at all reputation levels.

Ragnaros approximately has a 3% to drop the legendary

[Sulfuras, Hand of Ragnaros]. In order to learn how to the craft the Sulfuron Hammer, you must turn in one

To get the quest you need :

Summon
The Firelord and his brethren once held sway over this entire world, mortal. As a servant of the Old Gods, he fought against the Titans for domination of this planet. The victorious Titans banished my master and his brethren to the Elemental Plane - there to remain imprisoned until the end of time.

A mere three hundred years ago, a reckless dwarf named Thaurissan summoned the master from his fiery realm. His return to this paltry world devastated the surrounding lands and created this volcanic Core. Mighty Ragnaros has slept under this mountain ever since.

What else do you have to say?

We, his sworn servants, do his bidding and enforce his iron-rule. Cut off from the energies of his fiery realm, Ragnaros is but a shadow of his true self. However, he has more than enough strength to be your end.

You challenged us and we have come. Where is this master you speak of?

Ranged knockback
BY FIRE BE PURGED!

Berserk
MY PATIENCE IS DWINDLING! COME, GNATS: TO YOUR DEATH!

Summoning Sons of Flame
COME FORTH, MY SERVANTS! DEFEND YOUR MASTER!