Not to be confused with Raid Finder. 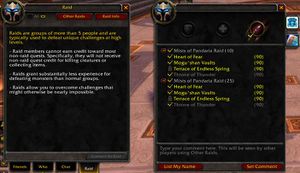 As of patch 5.0.4, the Raid Browser can only be accessed by pressing the Other Raids button in the Raid List, or by using the /or command.

The Raid Browser (Also known as Looking For Raid or Other Raids) was added in Patch 3.3.0 and allows players to join and advertise raid groups. The list can be sorted on character Name, Level, Class, Tank Role, Healer Role, and Damage Role. Signing up for a particular raid requires the player to meet certain level and gear requirements. It is accessed by typing /or in chat, or by opening the socials window (hit O by default), clicking on the Raid tab, then clicking the Other Raids button.

Unlike the Dungeon Finder, which actively attempts to create a party, the Raid Browser merely allows other players using it to see who else is interested in raiding a particular instance.

A certain average item level may be required to list your name for some raids. You may also not queue for raids you're already locked to[citation needed] .