For lore about raiders, see Raider.

Raiders are the most vicious of the Orcish hordes, these minions of Blackhand are trained to show no mercy. Riders of the darkwolves, these savage warriors use the speed and ferocity of their mounts to make them a deadly enemy. Faster than those who attack on foot, they have perfected the tactics of tearing through columns of enemy soldiers like a hot wind.[1]

Raiders are the main melee attacking unit. They are extremely useful as they have a good amount of HP and five points of armour. Their main usefulness is the fact that they are the fastest unit, and can also be upgraded to become even faster, making them useful in luring the enemy into a barrage of spears. They are also very useful against Catapults and spell casters; Catapults aren't able to hit a Raider due to the former's slow attack speed and a spell caster is only useful from afar. 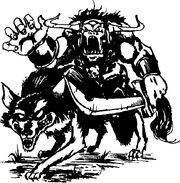 A Raider as seen in the Warcraft: Orcs & Humans Manual.

Breed Faster Wolves
Increases the speed of Raiders by 1

Breed Faster Wolves
Further increases the speed of Raiders by 1