Not to be confused with Ra.

Rajh, Construct of Sun, is a boss of the Halls of Origination in World of Warcraft: Cataclysm.

He is arguably the final boss of the dungeon as killing him awards the dungeon achievement. It is also impossible to kick players from the party using the Vote to kick feature or to find replacements using the Dungeon Finder after defeating him.

Rajh is one of the guardians of the Halls of Origination. Like the other constructs within the halls, Rajh was created to protect the powerful device capable of resetting all life on Azeroth. Each of the keepers has a sphere of influence. Isiset presides over magic; Rahj, the sun; Setesh, chaos; and Ammunae, life.[2]

In the early stages of the Fourth War, High Commander Kamses confirmed that Rajh and the other keepers were dead.[1] After N'Zoth was freed from its prison, and the Black Empire invaded Uldum, a Void-corrupted version of Rajh could be briefly seen in the Old God's vision of the Halls.

Rajh oversees the energies that have both sparked life and snuffed it out in an untold number of his kin. Considered the mightiest of his fellow constructs, Rajh holds the power to unleash the fury of a thousand suns upon Azeroth. 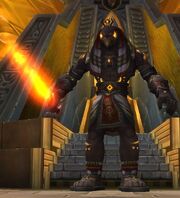 Rajh's fight is centered around interrupting his abilities as much as possible to greatly reduce his damage output as well as prolong his phase one. It is best to assign players with interrupts to watch for one of his two interruptable abilities prior to engaging Rajh. If your group is extremely limited on interrupts it is best to interrupt his Sun Orb as it is more difficult to avoid then Inferno Leap and easier to interrupt as well.

Rajh's Solar Winds and Sun Strike abilities cannot be interrupted. Solar Winds costs no energy and will summon a fire tornado and is often used within a few seconds of the initial pull, players need only keep their distance from it to avoid damage. Sun Strike will deal a somewhat large amount of damage to the entire party over time and will need to be healed through as it cannot be dispelled. If you are having trouble healing through Sun Strike abilities such as Power Word: Barrier and Divine Guardian can help greatly at reducing the damage taken by the party.

When Rajh's energy drops below 25 it is the most ideal time to use Bloodlust (or other equivalent) as it will last through Rajh's entire recharge phase for maximum DPS potential. During his recharge phase all players will deal 100% additional damage and Rajh will deal AOE damage to the entire group. It is best for players to stack near their healer to ease healing stress especially if you are being healed by a Paladin or Shaman. Once Rajh finishes recharging his phase one will start over, the cycle repeating until he is defeated.

The primary change in Heroic Mode is to Rajh's Solar Winds (the flame tornado), it will now leave patches of fire on the ground that last until the fight ends. The tornado will move randomly around the room but will sometimes move directly towards a player, for this reason it is best to try and pull Rajh to the side of his room in order to try and keep fire away from the center where Rajh will stand during his recharge phase. All normal mode mechanics still apply.

If you are attempting to do the

[Sun of a....] achievement it is vital to prolong Rajh's phase one as long as possible and then use all DPS cooldowns at your party's disposal while he recharges. This is made much easier if a Bloodlust/Heroism buff is available. Even if Rajh reaches 100 energy his recharge is not considered 'complete' until Blessing of the Sun is removed from the party.

Blessing of the Sun
Can you feel it? The blessed warmth of the sun?

Rajh appears as one of the bosses that can be encountered in the Tombs of Terror adventure in the Saviors of Uldum expansion for Hearthstone.

During Hearthstone's initial alpha, Rajh's artwork from the TCG was used for the Avatar of the Coin minion.