From Wowpedia
(Redirected from Rakeesh)
Jump to: navigation, search

"In my master's house smolder the burning husks of a thousand worlds.
I am here now to prepare a place for you amidst the ruin of tomorrow."

High General Rakeesh is a high-ranking eredar commander in the demonic Burning Legion and overlord of the Rakeeshi. Rakeesh was originally the son of Prophet Velen, but was kidnapped by the demon lord Kil'jaeden in a revenge scheme ages ago and broken by the Demonic Inquisition[2] to serve the Legion.

During the Legion's third invasion of Azeroth, Rakeesh was tasked by Kil'jaeden with launching an assault on The Exodar and destroy the naaru O'ros to prevent it from unlocking

[Light's Heart]. He succeeded, but was slain moments later by Velen and order champions. 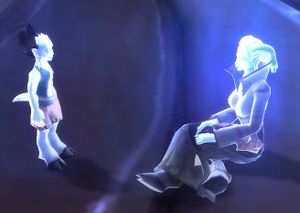 A young Rakeesh with his mother.

As a child, Rakeesh attended Kil'jaeden's announcement to the eredar about Sargeras. He was off to the side with his mother, Nuuri.[1]

13,000 years ago, Velen's son was captured by by Kil'jaeden.[3] When Velen was leading his people away from Argus, he asked Talgath to bring his family. Unfortunately for Velen, Talgath instead went to Kil'jaeden.[4]

Under the monstrous mental and physical torture of the Demonic Inquisition,[2] his mind broke and the draenei who would become known as Rakeesh began serving the Burning Legion as a man'ari. Rakeesh took the rank of High General and worked to further the Legion's cause, unbeknownst to Velen, who likely thought him deceased. 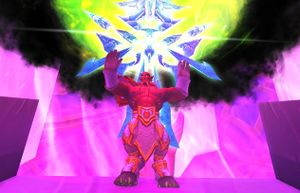 During the Burning Legion's third invasion of Azeroth, Rakeesh was ordered by Kil'jaeden himself to launch an assault on the home of the draenei people, leading to the Battle for the Exodar. The goal of the attack was the destruction of the naaru O'ros who dwelled within the core of the The Exodar, for he was the last descendant of Xe'ra and as such the only being left capable of deciphering Light's Heart, which represented a major threat to the Legion's plans.[3]

Caught by surprise, the draenei of the Exodar were quickly overwhelmed by Rakeesh and his Rakeeshi forces, who seized much of the city early on. Rakeesh himself made his way to the Seat of the Naaru and began directing the demons' efforts to wipe out any remaining resistance. Before long, however, Prophet Velen arrived with the order champions in tow. With their aid, and that of the Light's Chosen, the draenei began to retake the city from the Rakeeshi, closing the Legion's portals and rescuing lost draenei. Upon finding out about Light's Heart, Velen moved to O'ros's aid, who was being held and beaten by Rakeesh.

As Velen arrived, Rakeesh killed the naaru by summoning in a Fel Annihilator, crushing the holy being upon arrival. A battle ensued between Rakeesh, Velen, and the Prophet's allies, until Velen realized who the man'ari really was. Frantic, Velen attempted to stop his allies from harming Rakeesh—who he now recognised as his son—but it was too late. Rakeesh died, in his father's arms, much to the Prophet's sorrow.