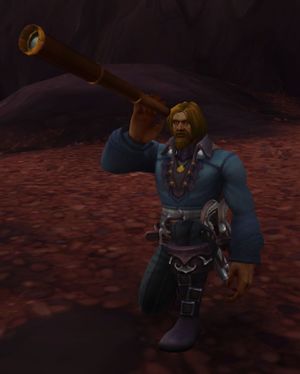 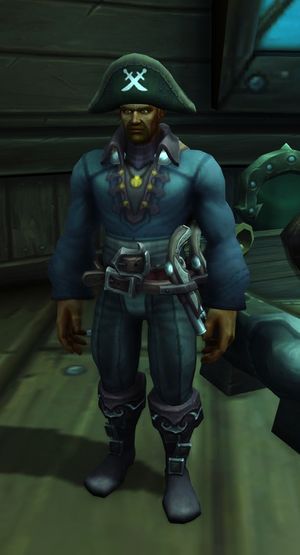 Captain Redmond after taking control of The Siren's Call.

Randall Redmond is an employee of the Ashvane Trading Company[1] initially encountered at Randall's Refuge in Vol'dun. He has recently been trying to make contact with the Zandalari exiles at the Scorched Sands Outpost.[2] When encountered by the adventurer, he claims that when he took the job, he was not informed that the Trading Company's expedition to Vol'dun was a one-way trip. He offers to give the champion the code to Captain Hartford's lockbox if they help him escape from Vol'dun. First, he sends the adventurer to kill the other members of his expedition party at the Ashvane Encampment[1] and gather some supplies he'll need when he uses his boat to travel back to Boralus.[3]

After completing these tasks, the adventurer meets back up with Randall in Redrock Harbor, after which he becomes known as First Mate Redmond. For their final task, Redmond asks the hero to murder Captain Hartford aboard his ship, The Siren's Call, stating that Hartford will hunt him down should he find out about Redmond's desertion. After Hartford is killed, Redmond takes up residence aboard the ship under the name Captain Redmond[4] and reveals that he has double-crossed the adventurer: he never intended to desert from the crew and merely used the hero's help to climb the ranks within the Trading Company. Despite his lie, Redmond remains true to his word and offers the adventurer the code to Captain Hartford's lockbox as a reward for their help (and an open job opportunity should they ever want to become a pirate).[5]

At Randall's Refuge
If you aren't moving forward, then you're falling behind. That's what I always say!

In Redrock Harbor
I see great things on the horizon, for you and me both.

Aboard The Siren's Call
The tides sure have turned in our favor, wouldn't ya say, <name>?