From Wowpedia
(Redirected from Ranger-general of Silvermoon)
Jump to: navigation, search 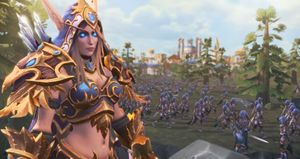 The Farstriders is a small but highly skilled group of rangers. The organization can trace its roots back to the Troll Wars, when a loosely affiliated band of high elf warriors occasionally worked together to defend Quel'Thalas. Roughly five hundred years ago, a group of similarly dedicated fighters formed and officially took on the name "Farstriders". Their mandate was to protect Quel'Thalas far beyond its actual borders and look after high elf interests all over Azeroth. The commander of the Farstriders was given a unique title: ranger-general of Silvermoon.[7] The title itself predates the formal establishment of the Farstriders, and was first given to a legendary ranger named Talanas Windrunner.[10] The title was eventually passed to Lireesa Windrunner, whose eldest daughter Alleria Windrunner was expected to inherit the position. Yet Alleria, who had always found little use for her people's traditions and expectations, chose to focus on more practical matters. Her sister Sylvanas Windrunner rose to become ranger-general in her stead.

During the Second and Third Wars, Sylvanas remained the ranger-general. Following her death at the hands of Prince Arthas, the Farstriders elected Halduron Brightwing as their new ranger-general.