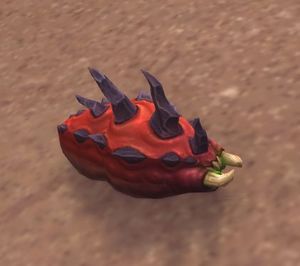 Ranishu are small humanoid bug creatures found in Vol'dun. They travel by rolling up into balls and devour anything in sight with no regard for taste or texture.[1] Rozzy describes them as ravenous whirlwinds of devouring destruction. When they get going, they consume anything in their path without even stopping, and when sated they discharge electricity from their antennae and then nap.[2]

Gulch beetles are their preferred foodsource, but in practice they'll eat anything.[3] Ranishu have multiple stomachs, and their stomach acid makes potent poison.[4] Their antennae are great conductors for magic.[5] When they have access to a large amount of food, ranishu can rapidly reproduce and escalate into a deadly swarm. The last time this happened, four entire vulpera caravans were devoured.[6]

Ranishu may be somehow related to the aqir, since they are found in Vol'dun which was originally stated at BlizzCon 2017 to have been devastated by the aqir.[7] However, this aspect of Vol'dun's backstory is never referenced in-game.