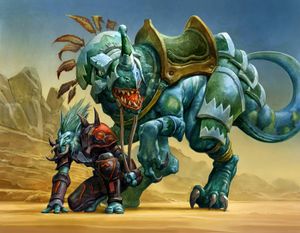 A raptor in the TCG

“A vicious raptor for a vicious Troll - a match made in heaven.”

Raptor mounts are the racial mounts of the troll race. Most are restricted to the Horde, though a number of neutral raptors have been added through the years.

These mounts give a 60% speed increase on land. You can purchase these mounts from Zjolnir <Raptor Handler> in Sen'jin Village in Durotar so long as your character has riding skill of 75 (obtainable at level 20). If you are playing as any race other than a Troll, you will also need to have Exalted reputation with the Darkspear Trolls.

These mounts give a 100% speed increase on land. You can purchase these mounts from Zjolnir <Raptor Handler> so long as your character has riding skill of 150 (obtainable at level 40), and are restricted similarly to the apprentice mounts above.

These used the old epic mount graphics and as of Patch 1.4 are no longer obtainable.

These following Raptors can be purchased from the Argent Tournament. You must have completed

Champion of Sen'jin or be a troll to gain access to this quartermaster.

These mounts are obtained by redeeming loot codes with Landro Longshot in Booty Bay.

[Travel Form] functions the same as a mount, and the ground travel form of the Zandalari troll race is a raptor form.