Ras Frostwhisper in his human form.

Ras Frostwhisper was a level 43 elite lich of the Scourge and overseer of everything that happened in Scholomance. He watched over and taught all those who rose to the position of 'Dark Master'. He was a lieutenant and favored pupil of Kel'Thuzad.[2]

Ras Frostwhisper was once a human mage from Stromgarde. He was a hedge mage, a rogue wizard that never received his formal training from Dalaran. He was among the first to join the Cult of the Damned and quickly advanced through its ranks. He turned himself over to the Lich King when the Scourge invaded, in return for immortality. Upon the ground in Stratholme, within the Slaughterhouse, Ras Frostwhisper took a dagger to his own neck and cut from one side to the other—all the time with a smile upon his face. His corpse fell onto Menethil's Gift and it is there that the Lich King raised his fallen corpse as a Lich, granting him immortality while Leonid Barthalomew the Revered looked on. He spent his time overseeing the operations in the necromancy school of Scholomance.[2] Magistrate Marduke has a plan to rob the lich of his powers, return him to his mortal form, and slay him once and for all. He had an ogre servant Kormok.

After the Cataclysm a new quest from Alexi Barov to kill him once more was added. During the liberation of Stratholme Eligor Dawnbringer commented that Ras still haunts Scholomance,[3] though he should already be killed at this point. The fact that he doesn't appear in the updated instance indicates that he is killed. Eligor's text would then be considered an error.

It seems that Ras Frostwhisper does not have a phylactery to contain his soul, like most liches. The soul of the fallen can still be found at Menethil's Gift, where he rose as a lich. The soul will cling to a

[Keepsake of Remembrance] from the lich's earlier life, and then to the physical form of Ras Frostwhisper, restoring his mortality. This is one of the few instances of an undead having his mortality restored.

It's not too difficult to kill Ras Frostwhisper as long as the healer keeps the tank alive. He has quite a lot of health.

[Soulbound Keepsake] for the quest can be tricky as it channels for 20 seconds, has a 15 yard range, and causes threat. However, a competent team should be able to keep him busy for the duration.

If you try to solo the conversion process you may find it a bit difficult, since he usually will cast Ice Block before you are done channeling, which will break the channel. I found if I cast a stun on him at the start of the fight, I had enough time before he got to the Ice Block spell (Since he usually does them in a certain order). Another nice thing is that if your a pally and you do the quest to turn him normal again, he actually is still "undead" after you convert him to mortal, so your undead spells will still work! 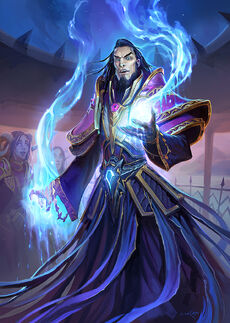 Ras Frostwhisper in the Scholomance Academy in Hearthstone.

Ras Frostwhisper's human form appears as a legendary Shaman/Mage card in the Scholomance Academy expansion for Hearthstone. His flavor text reads: "Always the favorite of Headmaster Kel'Thuzad, Ras nonetheless received a chilly reception from the other faculty."