God King Rastakhan (pronounced "RAH-stuh-kawn")[3] was the ruler of the Zandalari Empire. Blessed by the loa Rezan with a long life, swift healing, and strength beyond most trolls,[4] his kingdom was threatened by multiple parties, including his own Zanchuli Council. His daughter, Talanji, reached out to the Horde to help the Zandalari, despite Rastakhan's constant denial. Talanji's efforts were eventually rewarded, and eliminated the blood troll threat, called out the traitor Jakra'zet, and undid the schemes of the Zanchuli Council. The Prophet Zul nonetheless managed to set his plan in motion and launched a massive assault on the capital of Zuldazar, destroying the Great Seal of the palace with Mythrax the Unraveler. Rastakhan, having made a pact with Bwonsamdi after Rezan's death to save his kingdom, eventually died in the defense of his kingdom in a massive attack from the Alliance known as the Battle of Dazar'alor.

King Rastakhan rests on a golden throne, lording over all of the Zandalari. Empowered by the Zandalari gods themselves to act as their voice, he has ruled over two hundred years. King Rastakhan is consulted before every battle or major decision by the Zanchuli Council, which both advises the King and ensures his every command is executed.[5]

Rastakhan prefers that his opponents–some of which hail from the Zanchuli Council–are not able to get their hands on information meant for his ears. And while they underestimate him, his cleverness has resulted in him creating a special code that only he himself and his closest bodyguards, Zolani and her brother Habutu, understand.[6]

At least forty-six assassination attempts have been made on his life, the forty-sixth of which had also been his wife.[7]

When the word of Hakkar the Soulflayer's presence in Zul'Gurub reached the Zandalar tribe in the South Seas King Rastakhan sent emissaries to Yojamba Isle. There the trolls recruited champions from Azeroth's many races to defeat Hakkar.[8] 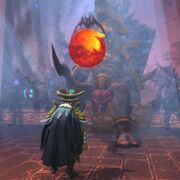 A vision of Zul warning Rastakhan

Years ago Zul warned King Rastakhan of a terrible Cataclysm. For Zul had seen a vision of a great armored dragon clenching the world in his ferocious jaws. Months later Zul returned, bearing more grim news from his visions. Still, King Rastakhan did nothing. Finally, mere months before the Cataclysm, Zul returned. He described the golden capital of Zandalar slowly sinking beneath the waves in the aftermath of the Cataclysm, its once-great people drowning as their mighty works slipped forever beneath the sea.[9] Zul advised the council and King Rastakhan to unite with the other troll tribes and to abandon their doomed homeland. Despite Zul's infamy, the council refused to believe in the scope of the disaster to come. Many felt that Zul was grandstanding to increase his own status and power.[10] King Rastakhan grew tired of Zul and his troubling nightmares. To be rid of the prophet, he granted Zul the use of his largest ships, so that he and his followers could seek a new land if his visions came to pass.[9] They scoffed as he and his followers began assembling a war fleet and reaching out to the lesser troll races.[10]

Ultimately Zul's vision was a half-truth. While Deathwing's Cataclysm rocked Zandalar to its foundation it did not cause the island as a whole to sink. It did however cause heavy damage, with the region of Nazmir being most affected; sinking to near sea level and being transformed from a lush jungle into a fetid swamp. It was not the end for the Zandalari, however, and they managed to rebuild a significant portion of Zuldazar.

Zul, who had left with the Golden Fleet before the Cataclysm actually struck, was unaware of this however. He believed that the spine of the land had broken in two, and the city and all its riches were beginning to slide into the hungry sea. He believed he was the only Zandalari equipped to help his people. Those who had followed Zul were from all castes, and had flocked to join his expedition.[10] Zul, and his Zandalari followers have issued a call to Azeroth's embattled troll populations: unite into a single mighty empire and save their race from extinction.[11] Meanwhile, Zul believed Rastakhan to be still sitting on his throne in Zandalar as the island sinks around him.[12]

Rastakhan supported Zul's efforts to make a new troll empire at the time.[13][14][15] However he did not approve of Zul's cooperation with Lei Shen and the mogu.[16] 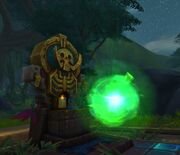 The Spirit of King Rastakhan.

Rastakhan pushes Zul off a ledge to his death

Seeking the Zandalari's legendary navy, the Horde arrived in Zandalar with Zul and Talanji, who had, in turn, sought the Horde out in secret to aid them against threats to the trolls. While General Jakra'zet of the Zanchuli Council was disgusted by the Horde presence on Zandalar, Rastakhan allowed them to stay because they saved Talanji from the Stormwind Stockades. He names a Horde adventurer the Speaker of the Horde, and assures them that while Talanji says he is ignoring the threats to his kingdom, he is not as blind as she thinks.[17]

Seeing Rastakhan as a weak king and the loa as weak gods, Zul sought to overthrow Rastakhan and create a new troll empire with G'huun as its god. He also planned on reviving the first king, Dazar, to rule in Rastakhan's stead.[18] Zul attacked Rastakhan and nearly killed him, but Rastakhan was saved by Pa'ku who brought him to Zeb'ahari.[19] With Rastakhan unconscious, Bwonsamdi, the loa of death, claimed his soul. The Zandalari contacted Rezan, loa of kings, who forced Bwonsamdi to give up the king's soul, but Bwonsamdi promised he would be seeing Rastakhan again soon.[20] At Rezan's temple, Zul's followers sought to drain Rezan of his power in the same way the Drakkari once did to their loa. Rastakhan and an adventurer slew Vilnak'dor, the troll performing the ritual, and once he was freed Rezan unleashed his fury upon the Atal'zul and their Kao-Tien allies. Afterward, Rezan convinced Rastakhan to realize he had grown soft and Rastakhan swore to take Zul's head.[21]

When the time came to hunt Zul, Rastakhan gathered together the loa of Zuldazar and led the charge into Atal'Dazar atop Mount Mugamba. However, during the confrontation with Zul, Rezan was slain. Without his power keeping Bwonsamdi at bay, Rastakhan began aging fast.[22] After a blood troll attack on Zuldazar, Rastakhan made a deal with Bwonsamdi: If Bwonsamdi gave him the power to take back his empire, then Rastakhan would elevate Bwonsamdi above all other loa in the Zandalari pantheon. Bwonsamdi accepted the deal on one condition: that the king's bloodline would be devoted to Bwonsamdi, to serve him in life and in death. Later, as Dazar'alor came under attack from Zul and Mythrax, Bwonsamdi empowered Rastakhan to kill Zul. He happily congratulated Rastakhan on taking back their empire.[23]

The crowd at Rastakhan's funeral.

After receiving word that the Alliance had mounted an attack through Nazmir, Rastakhan conferred with his daughter about how to deal with this new threat.[24] They determined while Rastakhan would defend the city, Talanji herself would lead the armies of Zandalar against the Alliance. However the attack through Nazmir proved to be a ruse to lure away the Zandalari and Horde armies from Dazar'alor, leaving the city defenses weakened enough for the Alliance to invade the city from the Port of Zandalar.

Following the deaths of the Horde's Champion of the Light and Jadefire Masters in battle, King Rastakhan urged Bwonsamdi to aid his forces. Bwonsamdi created a blood moon and raised the dead to fend off the Alliance. However, despite the Horde and the Zandalari's combined defenses, the Alliance breached Dazar'alor and faced Rastakhan. Rastakhan refused the Alliance's offer of surrender and declared that the Zandalari would endure long after the Alliance had crumbled to dust.[25] Determined to protect his empire and people, Rastakhan called on Bwonsamdi to empower him. However, the boon of the loa of death soon overwhelmed Rastakhan and threatened to devour his soul. As he realized that the "blessing" was actually a curse and that his deal with Bwonsamdi was a terrible mistake, he fell to the might of the Alliance, mortally wounded. As the Alliance retreated from the city, the dying Rastakhan was discovered by his daughter, and with his last breaths he apologized to her as his pact with Bwonsamdi was transferred to the Princess.

Rastakhan's funeral was attended by his fellow Zandalari, the other troll tribes, the Horde, and even the vulpera.[26]

Following his death, Bwonsamdi used his powers to prevent Rastakhan's soul from falling into the Maw, like he has been doing for all troll souls. After Talanji and her allies helped restore Bwonsamdi to power, the loa spared enough power to allow Rastakhan to reunite with his daughter. Rastakhan informed Talanji that he was proud of the queen she had become. As Bwonsamdi took him back under his care, he informed her that she must remember that she is the queen Zandalar deserves and to be brave.[27]

She is young and impatient. She does not understand dat de blood trolls have pestered our people for generations.
If she believes de Horde can help her, den I look forward to seeing what you will accomplish. She could use experience in dealing with foreign powers.
If she comes to harm, know dat I will burn your Horde to ash and turn dat pitiful collection of rowboats you call a fleet to floating debris.
Good luck.

During the March of the Loa questline
It be hard to say if Zul is a good planner or is just a good prophet. Either way, he be ahead of us at every step.
He makes[sic] to replace me with the bones of our first king, Dazar.
I am one to see trolls rule the world again, but I not be one willing to pay the cost of the dark heresies that Zul has turned to.

After Rezan's death
With Rezan dead, I feel my life weakening. Soon ol' Bwondsamdi[sic] will come calling. We must defeat Zul before den.

King Rastakhan is king of all trolls on Azeroth. He is an ancient and formidable witch doctor and keeper of troll lore. He is ancient and hoary, but his wire-hard muscles speak to his strength. A string of shrunken heads hangs from his neck, and a humanoid skull is impaled on his spear. He rules from Zuldazar on the island of Zandalar. While he technically is the king of all trolls throughout the world, it is not an entirely accurate description. This is because trolls often have trouble working with each other, despite conferences on Zandalar.[28] King Rastakhan is strong, wise, insightful, cunning and visionary. He is a big part of the reason that Zandalar's influence is again felt in the world, as he is instrumental in organizing the 6-year troll conferences and in sending representatives to work against Hakkar. Most other trolls respect him as a powerful and wise leader. Numerous loyal priests and witch doctors assist Rastakhan, and he shows his wisdom in which advice he heeds and which he ignores. Rastakhan is a patient but decisive ruler.[29]

Rastakhan, as king of all Azeroth's trolls, rarely enters combat when not accompanied by a host of barbarians, warriors, shamans, witch doctors and other support. He prefers to remain out of melee, decimating his foes from a distance with his spells. If he has time to prepare before battle, he doles out potions and alchemical concoctions to his elite: brews to increase their defenses and combat efficiency.[28]

While he is the leader of the Zandalari trolls, it appears he is only a jungle troll.[28][29]