For the critter and battle pet, see Rat (critter). 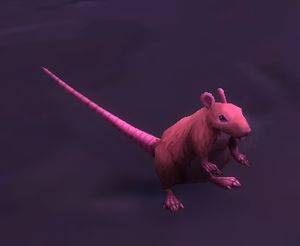 Rats are common rodents found all over Azeroth, Outland and Draenor.

Most rats are small in size, but some, such as a few monstrous individuals in the Dalaran Underbelly, can grow to enormous sizes. One example is the so-called ratstallion, who has grown large, agile and shadow resistant from years of chain-chugging potions in Dalaran's sewer system.[1]

Rats are oddly edible. Nipsy (who cooks them) and Monty (who captures them) of the Deeprun Tram operate a business in which they make Deeprun Rat Kabobs. Dig Rats inhabit Bael Modan in the Southern Barrens and can be made into tasty

[Dig Rat Stew]. In the lean times when adrift at sea, the sight of a rat was a welcome one.[2]

Unnoticed but to cats and ratcatchers, when Deathwing descended upon Stormwind all the rats beat a hasty retreat from the city. Only of late have they returned.[3] While many people believe black cats to be bad luck, black rats are held in higher esteem.[4]

The Bluewax kobolds of Highmountain frequently capture rats to either eat as food or keep as pets. The rats are tastier than rabbits, and easier to catch. They make both good diggers and good friends, unless they bite, in which case they instead make a good meal.[5][6]

Even the rats of Lordaeron fell to the apothecaries' plague, chewing upon the tainted flesh of the dead.[7] Where there is carrion, there will always be rats.[8] The rats in Redridge grow fat from feasting on the bounty of the village larders.[9] The bond between yak and yakrat is a strange one, and what the rat gains out of the symbiotic relationship is a mystery.[10]

Annoying and destructive, frostfur rats can be coaxed with enough cheese to become a tolerable companion.[11] Just like the rough and tumble sailors who live dockside, the wharf rats are feral, violent creatures.[12]

The intrepid archaeologist Harrison Jones has a well documented fear of rats.[13] 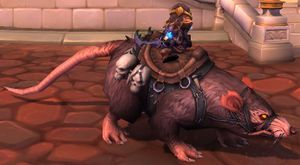 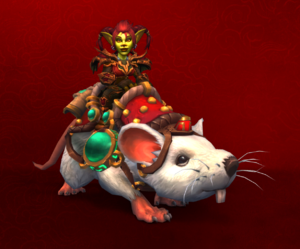 Various types of rats can be found as wild battle pets in a variety of zones.

The following battle pets share the same model as rats, even though they are not rats themselves:

In the canceled Warcraft Adventures, Thrall encountered a species called "razor-rats" within the Alterac Mountains.

These omnivorous rodents thrive almost anywhere. Rats usually run away. They bite only as a last resort. They are stealthy and good at balancing and swimming.[14]

Dire rats are a large species of rat living in the Emerald Dream.[15]