“Part of the Steamwheedle Cartel, this goblin port city provides a neutral haven for those that wish to trade goods and services in the Barrens.”

Ratchet is a major goblin port in Kalimdor, a medium sized harbor city located on the eastern shore of the Northern Barrens, directly between Orgrimmar and Theramore Isle. The town does most of its business through Booty Bay and Baron Revilgaz on the other side of the Great Sea.[1]

The majority of quests in Ratchet are only available to Horde players.

Having been paid well by Warchief Thrall for his and his workers' aid in constructing the city of Orgrimmar after the Third War, Gazlowe decided to establish Ratchet sometime after Orgrimmar's completion.[1]

Several minor shipping incidents near Ratchet led to increased tensions between Orgrimmar and Theramore Isle. Ratchet served as a staging area for the Horde army against the forces of Northwatch Hold, but when the truth of the incidents being the result of the Burning Blade playing the two sides against each other came to light, the battle was declared over by Thrall. 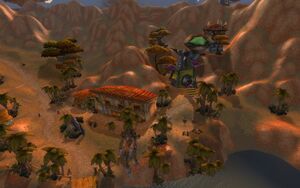 Ratchet from the air. 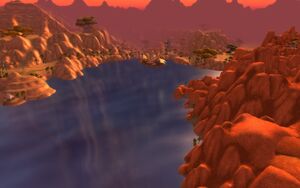 Ratchet is home to a medium-sized coven of warlocks that offered a high number of the now-removed warlock quests. Strahad Farsan, Menara Voidrender and Babagaya Shadowcleft are members of this coven, along with their acolytes, residing in a tower above the city.

Despite being close to the ocean, Ratchet did not receive any major damage from the Cataclysm.

The Horde fleet landed their Forsaken and blood elven armies in Ratchet during the Invasion of Theramore. Because of this, Theramore feared to sent refugees to Ratchet and instead sent them to Gadgetzan.

During the Burning Legion's invasion, the town was assaulted by demons. It was defended by Gazlowe aboard his custom shredder and Ratchet Bruisers, but some of them were controlled by a nathrezim and had to be rescued by the defenders.

The Alliance reported that during the Fourth War, Ratchet served the Horde. Alliance champions were sent to investigate the intentions of the Steamwheedle Cartel in the town.[2] The cartel did provide a vital stream of supplies and Horde champions were tasked with preventing the Alliance from discovering these smuggling operations.[3]

In the aftermath of N'Zoth's death and the end of the Fourth War, Gazlowe full threw his support behind the Horde by becoming the new Trade Prince of the Bilgewater Cartel, taking over from Jastor Gallywix who had abandoned the Horde.[4] With Gazlowe defecting from the Steamwheedle Cartel to the Horde the leadership of Ratchet is unknown.

Most of the quests to raise reputation with Ratchet and the Steamwheedle Cartel are located in the Barrens. Having a friendly or higher reputation will make the guards help you in case of initiated violence against you.

The City of Ratchet,[5] on Kalimdor’s central east coast, is run by goblins and shows it. Built from equal parts of industry and decadence, the goblin port city of Ratchet sprawls along nearly a mile of coastline where the eastern Barrens poke between Durotar and the Dustwallow Marsh to the sea. Ratchet is the pride of the goblins, a trade city where you can find almost anything your heart desires. Ratchet also has regular ferries that traverse the safe though roundabout route to the island stronghold of Theramore to the south.[6] Its streets sprawl in every direction, and the architecture shows no consistency or common vision. It is a city of entertainment and trade, where anything that anyone would ever want to buy — and plenty of things that no one ever wants to bu y — is on sale. Casinos, playhouses, brothels, fine restaurants, taverns, tearooms, gladiatorial arenas… Ratchet has it all. From the grungiest sailor to the wealthiest royalty, all can sate their tastes in Ratchet. Ratchet is Kalimdor’s largest port, and ships commonly stop here on their way elsewhere. Pirate vessels receive amnesty in Ratchet’s waters, bringing an influx of the disreputable and violent. Indeed, Ratchet is a hotspot, as races of all types and members of all social economic strata rub shoulders in the bazaars. Goblin watchmen are quick to put down conflict and make sure the inhabitants all play nice with each other. The city never stops. Its lights are on, its shops open and its services available at any time of day or night. One can also hire transport in Ratchet, traveling via caravan, ship, zeppelin or more exotic means. Everything in Ratchet has a price, of course.[7]

Ratchet is currently run by Gazlowe, the Overseer of Ratchet, of the Steamwheedle Cartel under the watchful eye of the trade princes, who give him considerably free reign. Ratchet also serves as a base of operations for many members of a corporate group called the Venture Company,[8] a collection of greedy entrepreneurs,[6] which is infamous for its massive numbers of goblin shredders.[8] They also run the city, and always keep their beady eyes on the bottom line at all times.[7][6]

Ratchet is a city where creatures who were once the butt of jokes now reign supreme. Its streets wander without rhyme or reason through neighborhoods dedicated to one activity: commerce. Ramshackle warehouses stand next to stately stone homes. Fine shops press cheek to jowl with rude huts. Wares of every type imaginable — and some beyond the imagination — are on display in markets and in exclusive boutiques.

The goblins run their operations around the clock, and boats are always pulling in and out of harbor carrying loads of precious goods and cargo. Goblin guardsmen patrol the streets, making sure that the various Horde and Alliance visitors play nice with each other.

Goblins welcome anyone with gold or items of value and a willingness to trade them for their wares and services. Merchants throng the marketplaces each day, selling everything from silks to slaves, and even at night the stores lining the twisting streets and alleys remain open for business. Those with the money can listen to skilled musicians while drinking fine ales and eating food prepared by expert chefs. For those with earthier tastes, the streets along the wharf teem with whorehouses, taprooms, and casinos. Since goblins are essentially neutral to everyone, Ratchet entertains members of each race who come for the nightlife. All in all, Ratchet is a wild place, offering great bars, fight clubs, girls (and guys), and fast boats.

In addition to commerce, Ratchet hosts a series of arenas that sponsor gladiatorial tournaments. These enormously popular tourneys are open to all comers, and winners can reap enormous prizes. The princes of the Golden Circle often hire those who distinguish themselves in the arenas, either as bodyguards or as caravan escorts.

Ratchet is the largest port on Kalimdor, with as many ships bringing cargo in as there are ships heading out for other sites around Kalimdor. In addition to legitimate trade vessels, pirate craft receive amnesty while in the port of Ratchet as long as they can pay the stiff docking fees. This situation makes many merchant captains furious, but they cannot hope to stay in business if they boycott Ratchet. Moreover, the Lawkeepers and hired mercenaries prowling the waterfront are eager to deal with anyone looking to cause trouble.[6] More than one drunken hooligan has laughed at being told to calm down by a pair of tiny goblin guardsmen...only to wake up in jail with bruises and singed clothing.

The skies above Ratchet are almost as busy as the harbor, full of goblin zeppelins, dwarf flying machines, and other aerial contraptions. The aircraft provide merchants and travelers with quick airborne transport to anywhere in Kalimdor — though when the regular cargoes of the trade princes need to be bumped, stiff premiums are charged well above the normally high cost of such a service.