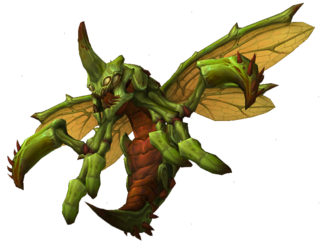 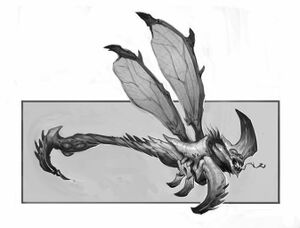 Concept art of a "dragonfly".

Ravager wasps (formerly known as dragonflies) are the second stage of the ravager life cycle. They are very aggressive and can often be found in swarms near their nests.

Ravagers hatch as small ravenous larva, but soon disappear into pupae, only to emerge as slender wasps with a swarm mentality and a ferocious sting. Wasps quickly set out to gorge themselves until their wings can no longer support their body weight, after which they undergo a third and final metamorphosis into a vicious four-legged insect.[1]

Amberbarb wasps often try to provoke larger creatures to attack it. Once their victim strikes them, they will retaliate with the entire hive.[2]

The venom Gorgrond wasps have is extremely powerful. To face one is to possibly face one's own death.[3]

The botani use ravager wasps to pollinate their bloom[4] and they are often found in the same areas, unlike most other fauna, which are used for mulch.