The ravasaurs are large, raptor-like dinosaurs.[1] The ones in Un'Goro are highly intelligent, volatile, and have a sense or code of conduct. Lar'korwi is the most dangerous. In Taur-ahe, its name means "Sharp Claw," but that does not do him justice.[2] The ravasaurs of Zandalar are more distinct from raptors than the Un'Goro breed are, with crests of feathers on their heads and tails.

Ravasaurs may be common throughout other lands than just Un'Goro, as they are common troll companions alongside raptors.[3]

The females produce an awful smell from a gland in their heads that allow males to know they are ready to breed.[4]

The venomhide ravasaurs are extremely deadly, with poisonous blood, poisonous spit and even poisonous skin. Attempting to mount one without first building up a resistance to their toxins will result in death only a few hours later.[5]

Baby ravasaurs apparently grow very quickly.[6] Larger than other raptor infants, ravasaur hatchlings grow into towering reptilian beasts capable of massive devastation.[7] Venomhide hatchlings are vicious and must be trained from the moment they hatch.[8]

The ravasaurs of Zandalar have strong stomach linings and are able to eat nearly anything.[9] 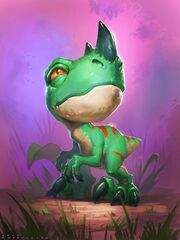 A ravasaur runt in Hearthstone.

The wording in Coming of Age implies that ravasaurs are considered a completely separate species from raptors, despite both sharing the same model.