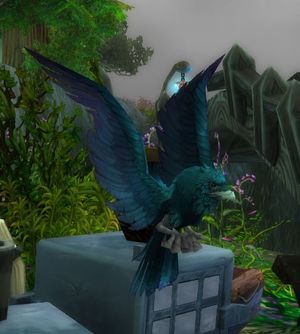 Ravens are a species of bird primarily found in Outland, though a few raven critters can also be found in Stonetalon Mountains. The ravens of Outland seem to have a special connection with the arakkoa, with many ravens serving the various veils. A subspecies of raven is the dread raven, which the Raven God Anzu is the father of. The former vrykul Vydhar states that not only are they filthy, (as apparently one that can understand them) these birds are foul-mouthed and rude. They apparently like to insult by speaking uncouth things about one and one's lineage.[1]

In Kul Tiras, ravens are used as homing pigeons to send messages.[2]

Ravens are a type of bird. These glossy black birds are about 2 feet long and have wingspans of about 4 feet. They combine both claws into a single attack. They are non-predatory birds. They are solitary and live in temperate forests on Azeroth.[3] Ravens in cold climes are under some competition with storm crows, but are not completely shouldered out.[4] 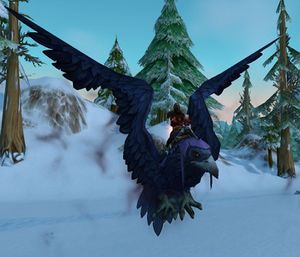 As a hunter's pet