Raven Hill is an abandoned town located in western Duskwood, north of Addle's Stead and south of the Raven Hill Cemetery. Though once all but empty, several worgen have taken up residence here in their search for a cure to the worgen curse. 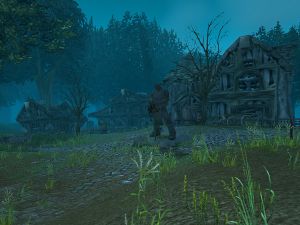 Until recently, the village held only a few living persons - Jitters, and Bliztik the goblin vendor, who could be found hiding on the top floor of one of the buildings.

It was also haunted by the Unseen.

Some Gilnean worgen now reside here in tents and wagons, including Oliver Harris, who is trying to catch and test solutions on mindless Nightbane worgen.

During the Burning Legion's third invasion of Azeroth, cultists of the Veiled Hand led by Felcaller Whitley took shelter in an abandoned building.

This ghost town once took pride in its honor for the dead. It held a mortuary school that graduated the finest embalmers in Azeroth. Then the undead rose up and murdered most of the inhabitants. After struggling to combat what had once been their loved ones, most townspeople gave up and fled east to Darkshire. The Defias Brotherhood tried to set up camp in the town in the aftermath of the exodus, but even they could not take the constant attacks by the undead. Some citizens remained, including a master embalmer known as Abercrombie, who lived near Raven Hill cemetery until recently. A serious man, he worked both to stay alive and to stop the undead - or so he claimed. Raven Hill is possibly the origin of the massive Black Riders, huge beings that suddenly appear with hellhounds at their feet to run down frantic travelers. Some nights they skirt the perimeter of Darkshire, howling loudly.[2]

In Warcraft: Orcs & Humans, there was a town named Sunnyglade which was situated where Raven Hill is located in World of Warcraft. They might be one and the same, as is the case with Darkshire having once been Grand Hamlet.[3]