For the sword, see


or Breastplate of the Guard
174

Years later, as the War of the Ancients raged on and the Burning Legion's grip upon this world took hold, Illidan would meet a military leader known as Kur'talos Ravencrest. He too would see the potential within Illidan, eventually promoting him to captain of the Moon Guard: a powerful group of night elf sorcerers.

We must experience this memory in Black Rook Hold, located on the western shores of Val'sharah.

Without Light, the darkness cannot exist.

The line between good and evil is thin, and resides in a place where intention means little.

Illidan wondered how those around him could be so blind to the threat of the Burning Legion. Fate is not without a sense of irony. 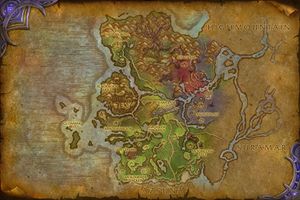 Black Rook Hold is at the west of Val'sharah. Do not go to the entrance but to the prison entrance but don't go in it.

Near the prison entrance, Xe'ra prompts you.

Xe'ra says: An ancient memory stirs. When you are prepared, call to me and together we will uncover a piece of Illidan's past.

Press the extra action button to do the scenario.

Preparing For The Apocalypse

Illidan Stormrage says: Excellent! The power radiating from the portal will energize me so long as I remain nearby. I must remember to return to these portals whenever I am fatigued.
Moon Guard Acolyte says: At your command, captain!
Illidan Stormrage yells: I am ready, Lord Ravencrest! Lower the portcullis!
Kur'talos Ravencrest yells: Lower the gate and brace yourselves! Glaive throwers at the ready!

The Road To Fel

Intro
Xalian Felblaze yells: Run, little Ravencrest. Run! There may still be time for you to flee and live out your final miserable days cowering in a tree somewhere!

Aggro
Xalian Felblaze yells: What's this?? Ravencrest has sent a pup to face me? I will teach you to respect your betters, child!

75%
Xalian Felblaze yells: You dare to defy the Burning Legion? Kneel before the unmatched power of fel!
Illidan Stormrage says: Her fel magic is too strong. I could try and siphon energy from my Moon Guard and use it to unleash devastation upon this demon, but my mages will die too.
Illidan Stormrage says: Alas, what choice exists? If I fall, Suramar falls tomorrow, and with it my beloved Tyrande. I must act now!

Stormrage Obtained
Xalian Felblaze yells: You... You killed your own soldiers?! You crazed fool! You've sealed your own fate!
Illidan Stormrage says: You were right, demon. Fel is more powerful than the arcane, but you wield it clumsily! Let me show you what destruction a master's touch can bring!

No Man An Island

Illidan Stormrage says: Thousands more! It appears as if the demon armies are coming from the portal in the courtyard below. I'll need to destroy it if we're to survive, but I'll need help from my Moon Guard.

Low on Health
Illidan Stormrage says: I am nearly out of energy. I need to find a portal to rest at or siphon the essence of my Moon Guard.

Defeated
Illidan Stormrage says: My carelessness forces me to fall back. I will learn from this defeat and strike back with a vengeance.
Moon Guard Acolyte says: Let's not do that again!

Second portal activated
Illidan Stormrage says: There are too many demons. I... I'll need more of my Moon Guard's power. Do I go too far? No, I must remain focused! The future of my people lies in my hands!

Illidan Stormrage says: The Nihilam portal is being protected by an eredar known as Balaadur. Conventional spells are useless against it. I'll have to call down the fury of the cosmos to destroy the portal. Then it will be just me and the demon.

Intro
Balaadur yells: I am the mightiest mage-hunter in all of the cosmos! You stand no chance, little elf!
Illidan Stormrage yells: Hunt this...

When Good Men Do Nothing

Kur'talos Ravencrest yells: We will join the battle in the arena! Captain Stormrage, lead the charge!
Illidan Stormrage says: I have to jump into the arena to destroy that monstrosity. Mother Moon give me strength.

During the Battle
Kur'talos Ravencrest yells: Do something, Illidan! It's tearing us apart! The hold cannot take much more!
Illidan Stormrage says: I've thrown everything I have at this creature to no avail. I must ask for the aid of my Moon Guard one final time.

If you've done the side quests during the scenario, you get the following:

Rhonin says: This cannot be!
Broxigar the Red says: Such savagery...
Captain Jarod Shadowsong says: Are we no better than the monsters we fight?

After the scenario ends:

Xe'ra says: Difficult decisions had to be made, but to understand Illidan's perspective is essential if we are to succeed in our mission. What would you have done differently?