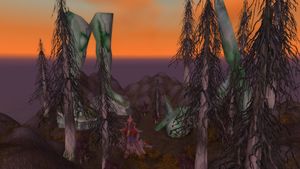 The Ravencrest Monument marks the remains of a huge statue in Azshara, referred to by Torg Twocrush as an "ancient night elven colossus".[1] Located southeast of the Ruins of Eldarath, what is left of the time-worn statue rests atop cliffs on the tip of Azshara's southern point, overlooking the Great Sea.

Undoubtedly an impressive site long ago, the statue now lies in ruins. Only the broken-off legs still stand, with various other parts scattered on the ground around them. Presumably, the rest has become buried, or sunk beneath the waves of the sea below. The ruins are inhabited by the hostile Spitelash tribe of naga.

The Ravencrest Monument cannot be accessed by sea. Travelers seeking to visit the site must approach it from inland and cross a bridge.[65, 87]

The Ravencrest statue is similar to one mentioned in the poem "Ozymandias" by Percy Bysshe Shelley. The poem itself is very similar to the original history of the night elves.

A common theory is that the monument was raised in honor of Lord Kur'talos Ravencrest, who led the mortal forces after the fall of Zin-Azshari, Suramar, and countless other cities against the Burning Legion during the War of the Ancients. However, the remains of the statue appear to depict a female night elf (though this may simply be due to model recycling), and based on its proximity to Eldarath, a city which predates the War of the Ancients and was destroyed during the Great Sundering, it is quite possible that the monument also predates the War, and was raised in honor of some other notable night elf named Ravencrest. The monument's out-of-the-way location and state of disrepair also intimate that the subject is not Kur'talos. Ultimately, there is simply not enough information to confirm that the Ravencrest Monument refers to Kur'talos Ravencrest.