Not to be confused with Rayne Feathersong.

Rayne is a night elf druid found near the entrance into the Fungal Vale of the Eastern Plaguelands. Prior to the Cataclysm, she was found at Light's Hope Chapel aiding druids with their Dreamwalker Raiment set.

Rayne appears at the Battle for Light's Hope Chapel during

[55] The Light of Dawn as a level 75 elite. Unlike most of the named mobs minus the Argent Defenders, both she and Rimblat Earthshatter can be taken down if you and several allies really focus on her. However, they will merely fall unconscious, rather than outright die.

She also appears at the Argent Stand in Zul'drak as a level 74 elite. She and Rimblat do not give any quests here in Northrend, but are interactable and will speak of how devastated Zul'drak is.

Rayne has taken a more direct approach towards healing the Eastern Plaguelands, she is now found beside the pathway to the Fungal Vale prowling in her cat druid form. She will direct adventurers towards destroying the floating constructs and planting seeds in the Vale, so that life may triumph in the land. 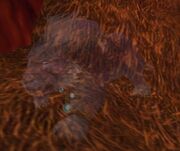 Rayne outside the Fungal Vale.

She started the following quests:

Hello, <class>. Please excuse me as I am having a conversation with Rimblat. He believes that even this land is not beyond saving.

Rayne, where should I look for savage fronds?

If you are one that prefers to hunt in the outdoor world, both Felwood's treants and Un'Goro's lashers are an excellent source of fronds.

If you are more of a risk-taker, the eastern and western wings of Dire Maul will provide you with a near limitless supply of savage fronds.

After the Plaguelands and the Battle for Light's Hope Chapel, I didn't think that we would witness anything more horrible.