Razak Ironsides is a level quest giver located at Toshley's Station in the contested territory of Blade's Edge Mountains.

He later travels to Kul Tiras, bringing the Razak's Roughriders with him and participating in Island Expeditions. He once again travels as part of Tinkmaster Overspark's group to Mechagon Island, where he and his roughriders participate in the defense of the Rustbolt Resistance against the insane King Mechagon, who seeks to mechanize the entire world.

Sparkqueen P'Emp spawns
Wait till that bug get's close, then blow it to pieces! I want nothing left.

Never bring a knife to a mech fight. 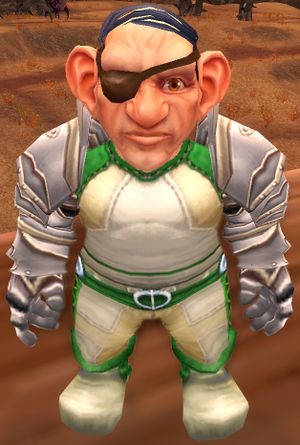 <Son / Young lady>, I'm not going to lie to you; things aren't pretty around here. We're under constant assault by the bugs and our very way of life, our freedom, is at stake!

Are you going to be a responsible citizen and help out?

FIRE UP THE DEF GUNS!
This is the last of them. Don't get sloppy!
We can handle it from here. Roughriders you are dismissed.
Where's our back up? I want them here now!
Come on you apes. You want to live forever?
Warm it up and give 'em everything you've got.